Has it REALLY been 2 Weeks? 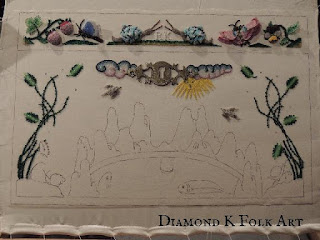 since I last made a blog post? Really? It doesnt seem like it~ time is going by so fast! I have been working on my front casket panel a little when I can steal some time. I have the clouds done, and the base foliage, thats about it. Working on a zillion little rose petals for the roses, I am up to 66 made to far,  and that is only for the back layer of petals on the attached flowers...I will have just as many or more for the interior petals....I havent decided yet if I will make fully detached roses yet...will have to see how it looks first.
Thanksgiving came and went in a flash, I have managed to get the rest of the floor in the house finished, so I am super happy to have that done. Only 18 years of living here it has taken me to get the floor in...(.now you see the significance of the snails on my casket.)
Working madly on Christmas orders, if you order a slate frame now tho, I cannot guarantee delivery before Christmas. Working on next years classes and kits....I am hoping sometime in all that I will feel the urge to put up the Christmas tree in the gallery. At this point, a little voice in my head says
'whats the point....it takes so long to put up, it will be up just a few weeks and  you will have to take it down again'
I recall this time of year passing alot slower when I was younger....
Posted by Rachael Kinnison at 8:00 PM No comments:

And its STILL Snowing here in Southern Colorado! 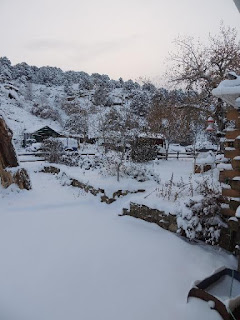 Go figure...the season I am not elk hunting...it snows....and snows.... About 10" maybe this time??? Its still snowing and blowing and being utterly disagreeable outside...the children are home, no school today....
I have a pot of tea on and trying to suppress my urge to blast my favorite 1940's Christmas Album. 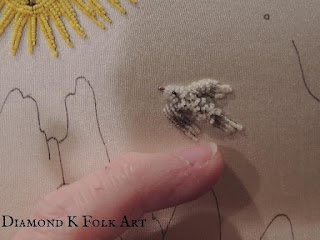 Despite what it looks like outside, in 'my world', inside nice and cozy(actually the tip of my nose is quite cold because I keep it around 50 in my part of the house...), the sun is out on my front casket panel, and a precious little dove has come flitting by to land on my finger.
Posted by Rachael Kinnison at 12:36 PM No comments: 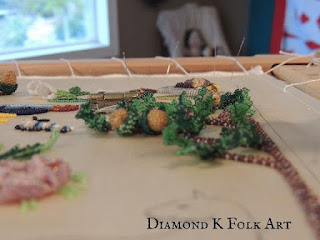 It always feels great to get a project finished~ and committing to work an entire casket is no small undertaking. It can be so overwhelming, some who want to make one, will keep waiting for the right day....for the stars to magically align in the universe....for them to get that last project done first...that they will never ever even start their dream project. It's true. If you want an embroidered casket, your going to have to make it a priority in your life, and just do it already! To lessen the overwhelming impact of it all on my psyche, I have broken it down into several smaller projects.... first was to finish the inside...but within that goal, was to install the music movement...install the mirrors....finish the tray....make the doors and hidden compartments in the lid....embroider the inside doors....so many little projects that one can celebrate getting FINISHED!
The outside is no different. Within each panel~ Lid, Front, Back, Side 1 & Side 2, and Friezes, ...I break them down into their elements, and focus just on that particular thing....before you know it, the entire thing is done!
I always work stumpwork from top to bottom, so my threads don't get caught on previously worked things. The trees came first, and in the case of the oak on the right, I worked all the acorns and leaves when I worked the trunk, then set them aside to attach pretty close to last.  As always...I ended up with twice the amount of leaves as I originally planned. 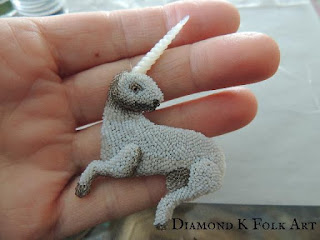 I have already posted about the grotto, so other than that, I have been dreaming of these unicorns for years, literally. Not so much bead wise, but their horns, I have always had a specific picture in my mind of what I wanted them to look like. It was very difficult to make it happen tho. Those blasted horns gave given me grey hairs trying to get them just right. I wanted to use a spiral sea shell, a tiny baby tibia fusus. But I just could not find one small enough...let alone a matched pair.  I considered carving my own from some old piano key ivories....but the 'small' problem kept creeping in on me~ which was that I could not hold something so small and that hard, tight enough to carve it with any accuracy. Yes, I tried. And , No, I'm not posting pictures. I made wood horns wrapped with a spiral of wire, then wrapped over that....which didnt come out too bad actually, they were sized perfectly and looked nice, except they were gold....and I didnt want gold horns..I wanted a natural, white spiral horn blast it!
I finally found what I wanted kind of by accident actually....I found a necklace pendant  of carved mother of pearl, and cut off what I needed for my horn. I cut a tab on one end and drilled it so I could attach it to wee beastie's head, and Thank You Jesus! my quest was over. I prefer to work all my animals in hand, and then attach them as a slip. After they are attached, they get their ears, mane and tubular peyote tails. 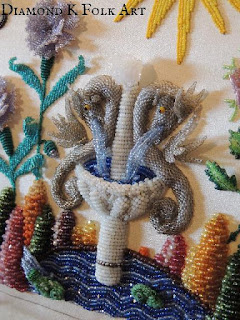 I love the colors and how they all work to compliment each other. And...since they are worked in beads, antique beads colored by the elements they are made from, and not dyed like modern beads....I can be confident that this panel will look exactly the same as it does now,  for hundreds of years to come (if it survives that long) 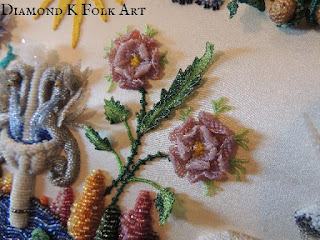 The last two little creatures to land on my panel were two little itsy bitsy bees, one hovering over each rose. 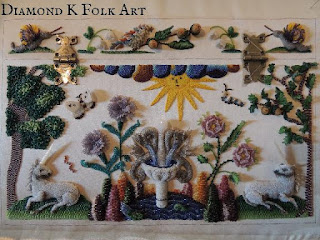 I left this picture big so you can enlarge it~ theres those blasted stormy clouds that gave me so many fits. I do really like the colors tho.  Mounting your panel and its accompanying frieze on the same slate frame, helps to keep all a cohesive unit. When I work my double casket, I will have side, frieze 1, slope and frieze 2 all on the same slate frame so I can work all together as one side. 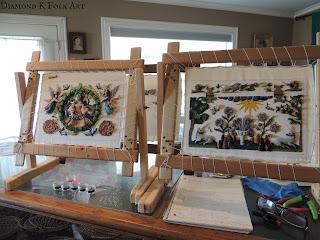 So to date, I have completed all four friezes, the top of the lid and the back.  On to the front panel next, which is the opposite end of the enchanted grotto.
Happy Stitching all~
Posted by Rachael Kinnison at 7:42 PM 1 comment: 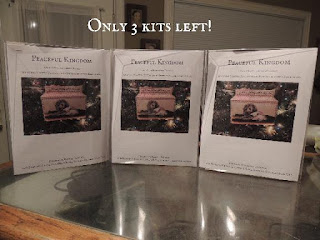 For those of you still interested in a kit for this years limited edition ornament, I have a scant 3 kits left! If you are interested in ordering one, you can do so on the Diamond K Folk Art Blog, link to the right. 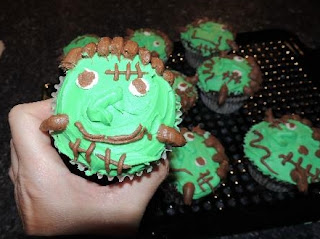 This past week was a doozy~ I am exhausted. All my children love Halloween~ I love it! Pip put on a marvelously fun party for the family with games~ pin the nose on the pumpkin...ball toss, her surprise pumpkin balloons where she hides things in the balloons and when if you pop the right one it comes zooming out at you....she made the most amazing monster cupcakes for her cake walk.... 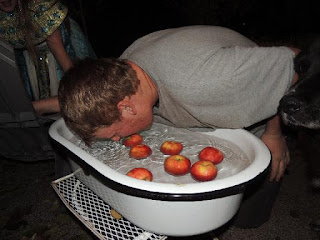 And of coarse, what Hallowe'en Party would be complete without bobbing for apples? It was the most fun ever 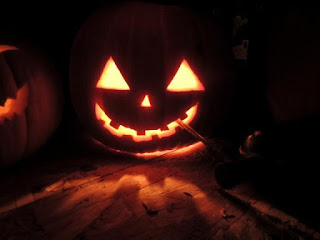 We ended the night with lighting the children's punkins they carved earlier that day...it was a busy Sunday! 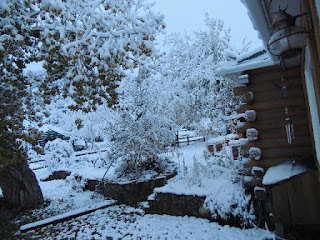 Then along came Tuesday...and 8" of heavy wet snow. 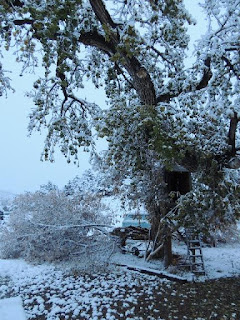 We lost several trees, including our oldest Elder~ it split right down the middle. The Children were looking forward to their Halloween parties at school, but school was cancelled, and our power was out all day. Pip got sick...it just kind of snowballed from there...no pun intended. 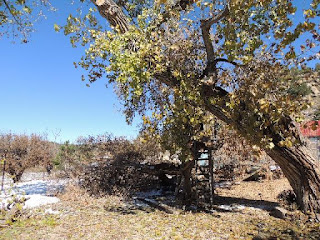 The rest of the week we have spent clearing trees~ half the elder fell on husbands International pickup....its under the big brown fluff of tree on the left..and his blue Scout is under the other half of the tree to the right...I told him he should have bought a lotto ticket to be that 'lucky'... 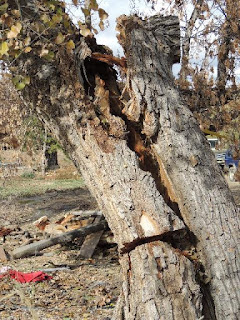 What broke my heart was the weight of the snow also cracked our biggest, oldest cottonwood~ this tree has stood on this property since the late 1700s, the original Madrid Plaza adobe commissary  stood just to the left of it. So, once we got the Elder cleaned up, my son made a little relief cut at the bend, we thought it would fall then but this old majestic tree stood fast, putting up a valiant fight to the very last second 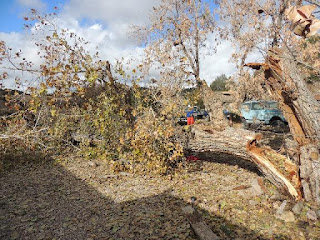 I cried my eyes out over this tree, so sad to see it go~ place just doesnt seem right, or the same without it.  I did manage to get the back panel of my casket finished tho, in this mess of a week with a sick child and no power...I'll save that for another post. Stupid daylight savings time is here~ so its now dark by 4.30 pm...all I want to do is sleeeeeeeep!
Posted by Rachael Kinnison at 8:40 PM No comments: