What You can get from a humble stack of wood.... 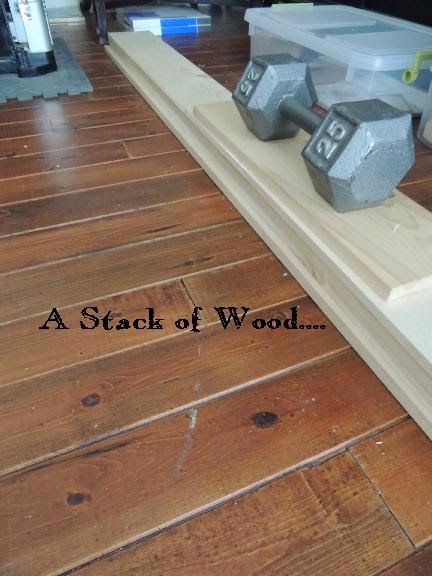 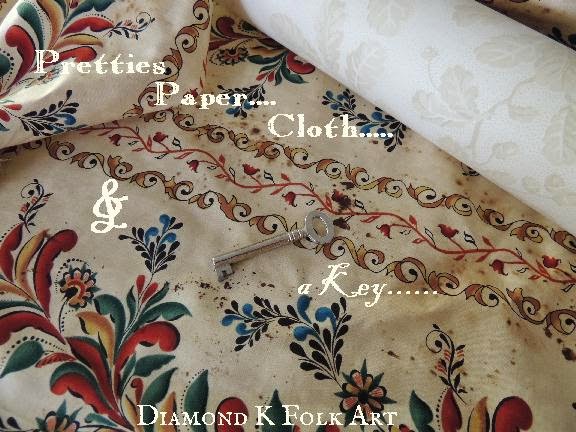 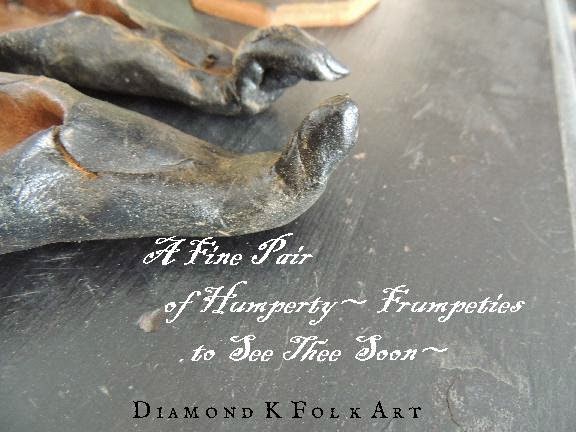 I hope the girls to be finshed by October 1st!
Posted by Rachael Kinnison at 10:14 AM No comments: 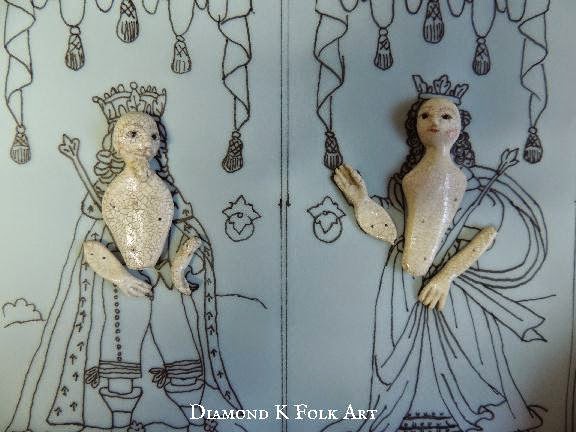 I just had to share these cutie patuties with you all! They were a custom order made to fit the Door'd Mirror Frame that Thistle Threads sells. They are sooo weensie~ the weensiest little people I have ever sculpted...with this much detail anyway~ their little faces are the size of my thumbnail!  I adore the King~ I sculpted his beard an exact match to the drawn stumpwork pattern. I can't wait to see them all made up~ Ill beg for a picture when she gets them done to share with you!
Posted by Rachael Kinnison at 6:04 PM 3 comments:

Something Utterly Wicked This Waye Comes..... 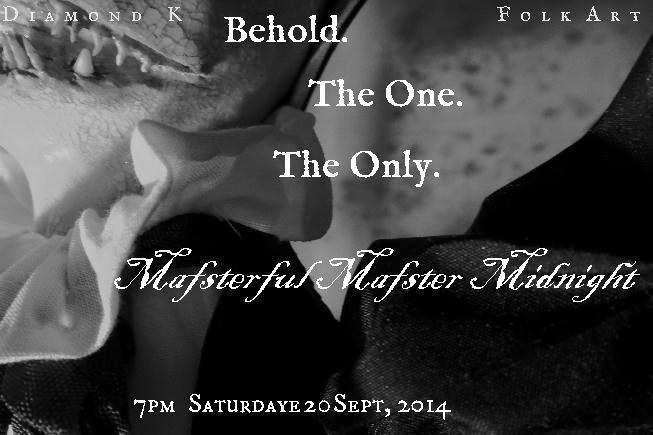 For those strong of Heart... with a deep & curious imagination for all things dark & magical~
A Wonderful & Wicked Something This waye if Comming....

My Witches in Autumn 2014 Prims Issue

At your Favorite Bookstore Now! 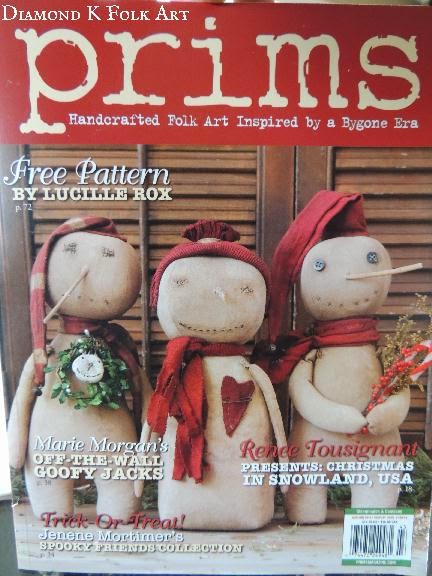 I am so honored to be included in the current issue of Prims Magazine, out now in your favorite bookstore! 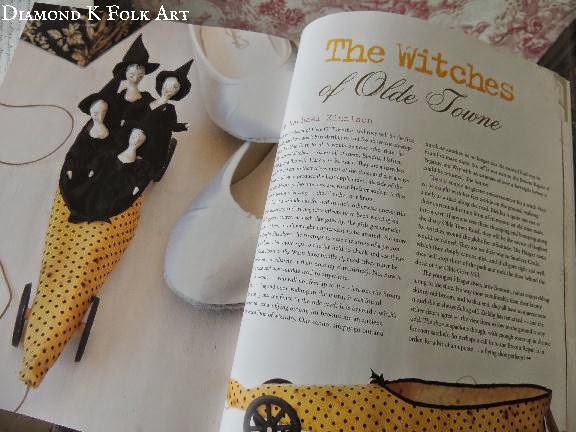 The Haagar Sifsters will entertain you with a four page article toward the back~  and when your all Hallowe'end out, there are plenty of frostys and Santas to get your minds churning away for Christmas...which at the rate things are going for me, will be tomorrow!! 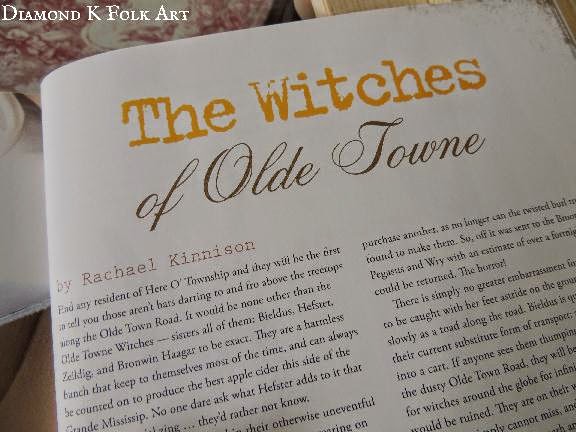 I am getting alot of emails for Halloweenies, which if you have something very particular in mind, I am always happy to entertain custom orders, which lately have been taking up the bulk of my time~ but I am working on a few special witchy~poos and a Grande Punkin Eater that will be offered soon ~ so keep checking back, they're on their way!

Posted by Rachael Kinnison at 1:57 PM No comments: 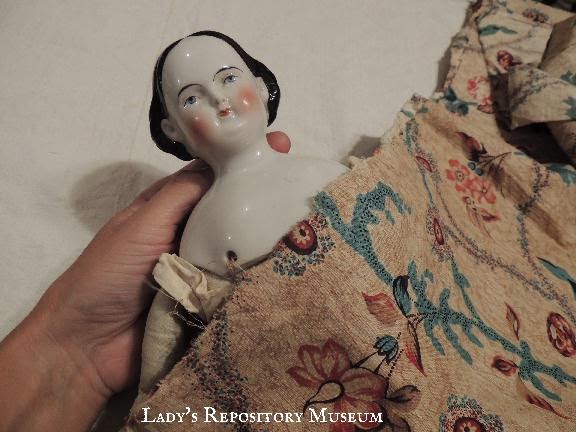 I love my early china dollys!  Poor little Sarah has been nekkid for so long. When I bought her, she had the most hideous 1950s made dress on, the sight of it made us both ill! I then found this lovely gown, and she liked it very much...but I didn't.... 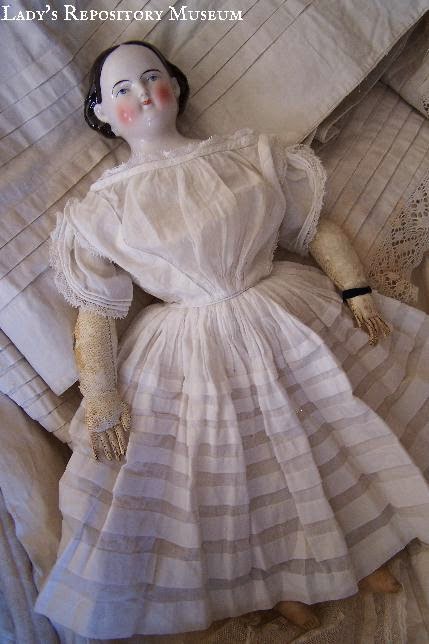 Well, I did like it.... but it was white! It was stitched beautifully and all original to her period~ then along came a ladye who really wanted it for her dollye, so I gave in and sold it. Even tho it was white, I should have kept it...yep, shouldn't have sold it. But I did, and I have promised I would find Dear Sarah another prettier gown to wear ever since.  There are an absolute plethora of whites available...whites whites whites...but Sarah did not want a plain white dress. So I have been looking and looking, and poor girl was just tired of waiting, so Mamma promised if we didn't find a period gown over her nap this summer, I would make her one 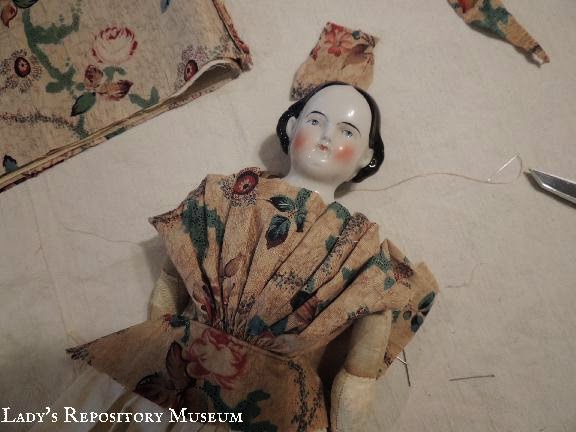 I have quite a large chunk of the lining of an old quilt made for a 4 poster bed~ its a fabulously thin early block print cotton ...quite a bit earlier than Sarah, but something a girl would have had around in Mamma's scrap bag to make dollye a dress out of. She chose a popular fan front style 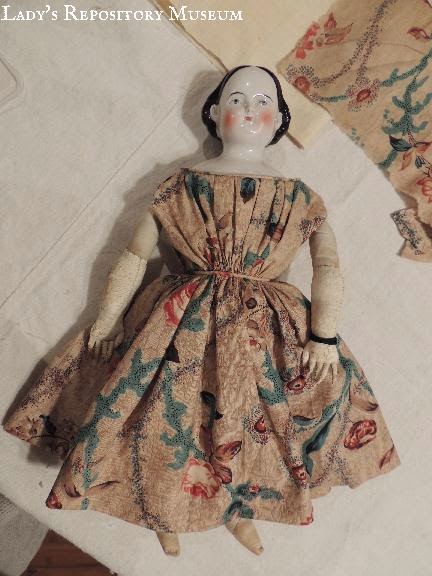 Dress doesn't look bad without the sleeves does it?  Sarah is an oddly rather plump shaped girl~ that's one of the reasons its so hard to find original gowns to fit the early dolls~ their bodies all hand made and proportions unique to themselves~ one cannot just look at the shoulder to hem measure of an old dress and have it fit. Her chest is very broad & full, tiny waist, and not much body at all! Her legs are extremely short with fashion feet 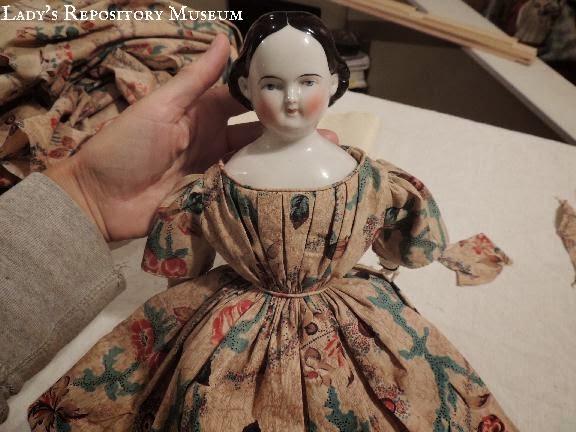 Her arms are stuffed very firm with horsehair~ so in making sleeves I had to give her something that would slip over them easily without having to have them bend, because they wont! All of my other early dolls of this period still retain their original clothing, and are all wearing the popular pagoda shape, or bell sleeves~ I have to imagine that part of the reason, aside from them being in fashion at the time, was because they were the easiest to get the dolls in and out of.  Little piping at the waist and neck are the only simple embellishments 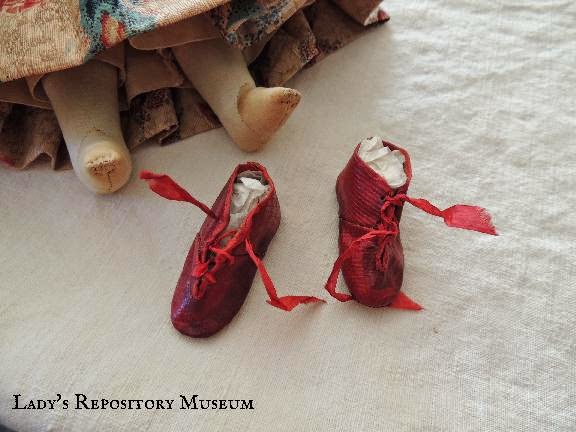 Look at those chubby feet! They are so short and broad over the foot I dont think I will ever find her shoes....I thought perhaps she could wear these little red ones I have, but nope, too long, way too long and clumsy looking on her. She will just have to wait a bit longer..... 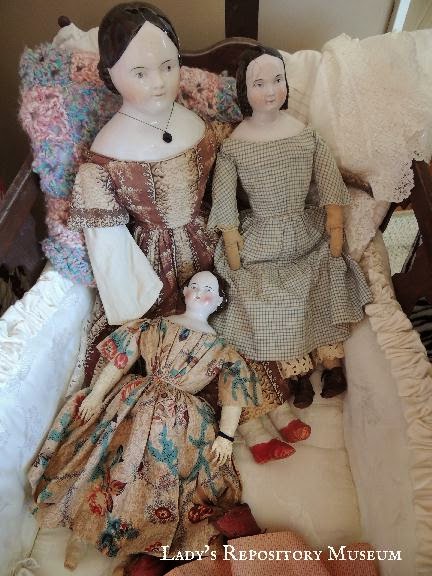 She is happy to join the girls~ Abby, Sophie and Joy(you can just see her feet there) are getting ready for Pip's birthday today~ nine years old already! The girls are all giggling and trying to remember back when they were just nine years old.....

Addendum~  Priscilla has asked about Sarah's ugly dress in the comments, so here it is! 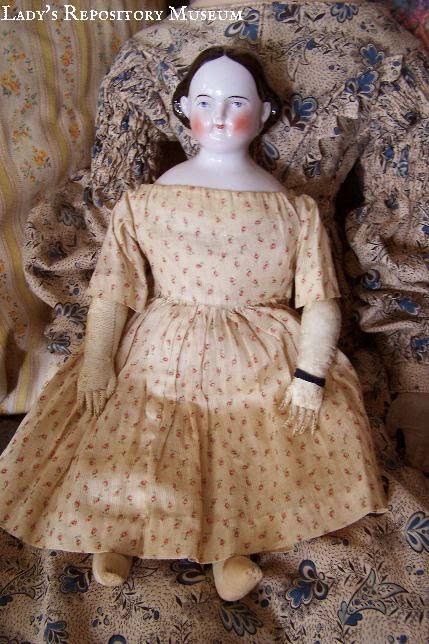 As you can see, it was newly thrown together and did not suit her nature. Priscilla also asked the ages of the girls in the picture~ large girl on the far left is Abbigail Blake,  her(or her owners) actual name inked on her body~ she and Sophie sitting next to her in the green dress are c1840-50 girls. Sarah is a little later in period, 1855-1860~ the mold of her exposed ears is not a common one~ she has no ringletts around the sides or back of her head.
To answer yet another question, yes, textiles were so precious they were used and reused and reused again. I do not, nor have I ever partaken in the cutting  of early clothes or finished textiles (quilts, coverlets, runners, church garb) to use in my doll making. My hands would literally not be able to cut, never. I do run across pieces tho at sales and such, unpicked large hunks are very rare these days. The fabric I bought that I used for Sarah's dress I bought as actual yardage wrapped tight in a sack at the International Quilt Festival in Houston several years ago...it wasn't until I unwrapped it after I returned home that I found it was in two large pieces, a right and left, each with cut outs for the post at the foot of the bed. I also found several little snippets of string every here and there, telling me it was indeed once a lining of a tied quilt or coverlet.  Flat yardage I have no problem with cutting~ I can think of no better way to honor the textile itself, and all the hard work and skill that went into its making, than by using it to dress an early dollye
Posted by Rachael Kinnison at 9:19 AM 4 comments: 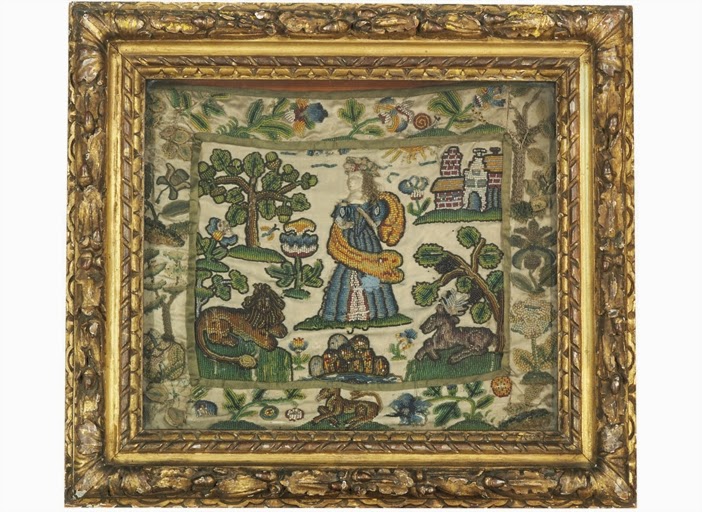 SO very exciting for me to have found another possible padded mirror case panel~ why so exciting you ask??? Because it is the only panel that I have found, other than Martha Edlin's, that is not worked in the Bethrothal Scene! It actually looks as tho it was never finished~ the actual lid is finished, as well as the North and South borders~ but the East & West have been patched in and are worked in silk thread and not beads. Or it could have been taken from a deteriorated case and framed later, without close examination it is impossible to tell. The dimensions are nearly the same as the other mirror cases I have studied. I stumbled across the photo in a cached section of Christies website the other night, and was not able to track it back to an actual auction listing, so have no idea when it was sold, but I'm still working on it. 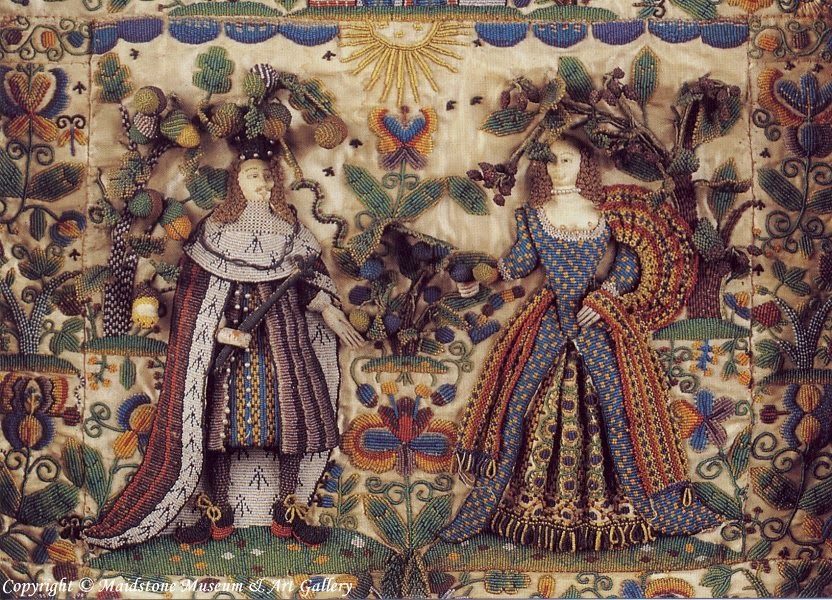 I'm positive that if I keep looking, I will find a padded mirror case one day that is worked in regular stumpwork and not beaded