Initials & Date are ON

So I Guess That Makes it Official... 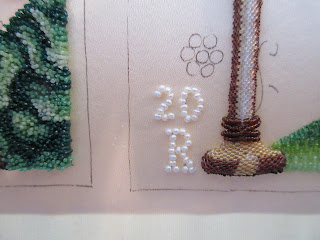 I officially need to get my fingers greased up and get to towne on these sides to finish them this year. I like the larger pearls...yes, REAL pearls~ I wanted them to look chunky and in a 'script' that I have seen in pearls on several period caskets~ the small one millimeter pearls I used on the front were just too small to get the look I wanted
If you look to the left, you will see a bit of the evil Satan's Bush on the Swan side panel....ohhh those bushes. Tip: Test your stitches on a practice piece before commiting on the actual panel
And I have an active practice doodle frame set up for such things....but did I use it this time? Nope. I had studied a casket up close at Colonial Williamsburg, and on it, in 4 different places, I found about 1/2" or smaller(I know why) areas with a very fascinating, microscopic stitch that I really loved the look of. It looks exactly like what I was able to execute in beads...but I still havent figured out the stitch in silk yet~ no its not a bullion stitch of any kind...anyways, I was bound and determined to have that on my casket.
Until.
Hours upon hours upon hours and a zillion beads later....I had like....literally....half inch of space worked...my eyes were killing me, I could no longer retain focus, my neck hurt....it was torture.
TORTURE!!!!!!!!!
But me being stubborn as I am, I kept going until I filled in every last space of my bushes, and covered over forever the garbled of overwritten mess of 2014, 2015, 2016, 2018 of dates I had planned on having there....
I moved them over to the Lions side 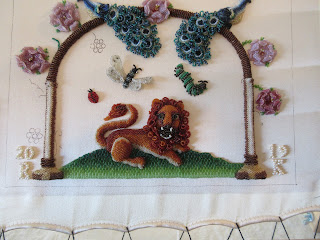 So, I better get busy on this~ I have all the background roses finished, all that is left that is drawn on the panels now are the grape clusters, so those will be next, then it will be a never ending sea of leaves leaves and leaves...and then most likely, more leaves
To say I cant wait would be an understatement...but...
I cant wait
Posted by Rachael Kinnison at 11:57 AM 1 comment:

Where did it go? 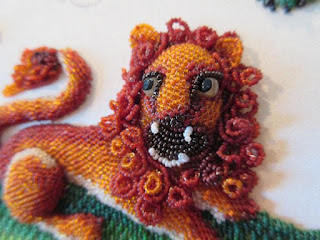 It seems like its been forEver since I was able to work on my casket~ I can't even remember if I have shared my Lion with ya'll?  I got him finished before I left for England...really wanted to give him real teeth...but alas, my tooth drawer did not yield anything his size, or worthy of his stately presence....so he got glass teeth...I hope he doesn't mind.
For my birthday husband gave me the gift of him cooking supper for an entire month~ I didn't think it would last, but here we are a week and half in, and hes still going, so I have been taking advantage and spending the time I would normally be cooking supper,  working on my casket. It's coming on very slow...a million and one flower petals and leaves...thats where I'm at. 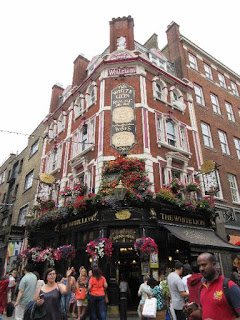 I had such a wonderful time in England, words cannot even describe it. I went with my bestie a week early before Summer School and we stayed in London and had a blast.  There was never a dull moment~ the first day, after arriving and getting our things settled at the hotel, we were off to Covent Garden. I wanted to get some paper at Il Papiro....but alas, the Italian Stationer no longer has a store in the Market. The White Lion was beautiful as ever...I think I need to eat supper here the next time I'm in London.... 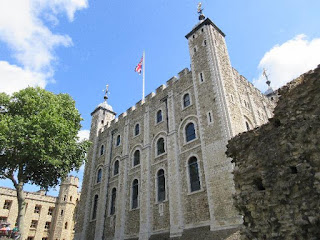 O.K. now this is a hilarious memory for me that will make me smile until the day I die...and probably afterwards for that matter....anyone who knows me knows I am a morning person and ALWAYS on time...always early...don't ever want to be late~ not me.  Well we had planned on walking across the Thames our first morning in London, and being at the Tower of London a little before 10 am, when it opened. I slept well on my flight, and wasnt feeling any jet laggy at all~ my bestie tho had been up over 24 hours by the time we went to bed....I didn't bother to get out my alarm (you can tell where this is going?) because I wasnt that tired, and well, it was just around 8pm....I would be up in plenty of time, and would wake her up if needed.....so I literally blink my eyes and am jolted awake by a loud slam~ someone had thrust open our door and the little flip lever thingy had caught it so they couldn't come in....about that time, I am wondering what the heck is going on because Im not really awake yet, I see S look at her watch and at the same time she jets out of bed and says 'its 11 o'clock!'
Oh my golly. I dont think I have ever slept that many hours in a row before! LOLOLOL  I am still laughing about it. So...we were a bit late getting over to the Tower of London, but it was fantabulous, none the less. 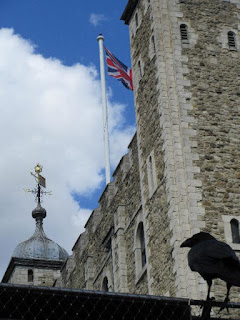 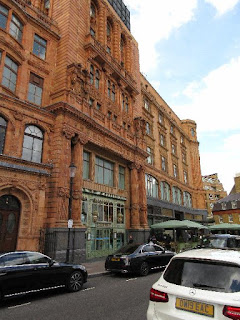 Who knew that LaDuree has a tea salon around the back of Harrods? Well you do now! 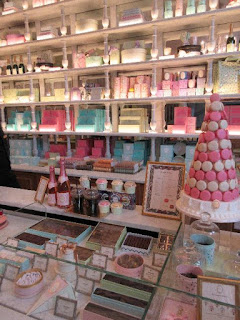 Can you imagine getting to work at this counter? Since when were tea & cakes so blasted gorgeous?
You must make a reservation for Afternoon Tea tho~ if you are thinking of going~ you can reserve online at Harrods' website 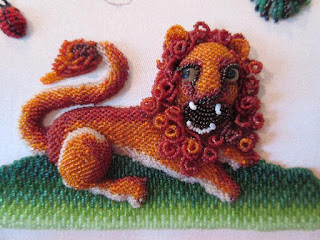 I have been plugging away at roses...trying to get all the flowers finished that are drawn on my panel first...then will work on foliages and see if I need more flowers. I am afraid that I will get these sides finished, and then go back and look at the top or the front, and decide they are too sparse and get sucked into a never ending vortex of adding more flowers and leaves until every bead I own is on here somewhere.....

Is Just About Gone gone Gone! 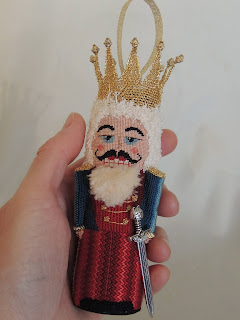 He has been a popular fellow this one....  If you have been pondering getting this years limited edition ornament kit, Ort King,  I have just a scant 12 kits left, and then he will be history!  You can click the link to learn more about him~ hes worked in silks and real gold on linen...there are 32 pages of step by step, full color photo & written instruction...4 pages of stitch and pattern guides...all threads & material are included save for a few things like scissors and embroidery hoop~
Next year will be the 5th year of my limited edition ornament series....I got somethin pretty special planned!
Posted by Rachael Kinnison at 2:10 PM No comments: 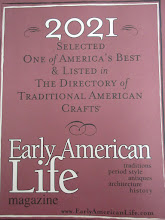