I love all creatures Great & small...those that know me  know this. But I get the absolute heebie jeebies! when I see a furry whatnot in my house. And by furry what~not, I mean the wee beasties that zoom around a zillion miles an hour, and when vexxed they will jump up to 2 feet right at you~ little bugger kangaroo mice we have here!  we have 5 cats here on the farm, and none can catch the furry  beast living in my oven!  YES!!! The thing has burrowed into the insulation in my kitchen stove, and we cannot get him out even after taking it as much apart as possible. I have tried glue traps, snap traps, live be nice to the thing traps..nope~ he is like mighty mouse!  Soooo fast.  So have fun imagining me screeching one morning when turning on the water in the kitchen while not quite awake yet, and it was in the sink and absolutely levitated straight up at me! That must have taken years off of my lifespan...years!  Now I prefer my little 'friends' that keep me company in the gallery~ much more quiet, and clean, and precious....all tho....... 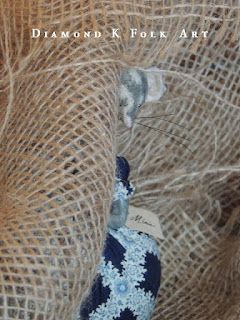 They do get to be quite mischievous and love to move things about so I cannot find them again....and this one, she and her sister have taken a liking to my Christmas tree! 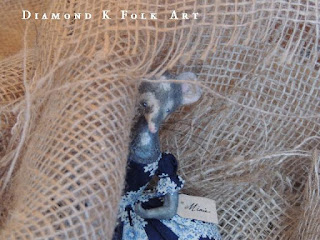 I wrap the tree base in burlap, and see~ see her peeking out at me! She must be up to something...... 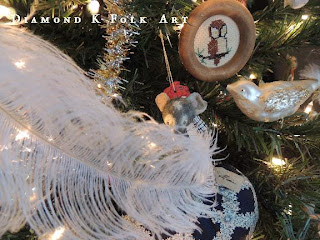 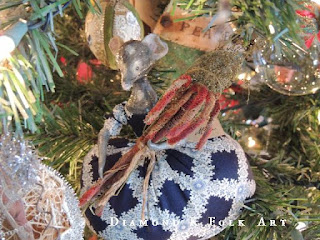 Ahhhh HA! She has taken my candy canes  Dear Annie gifted me!!!! 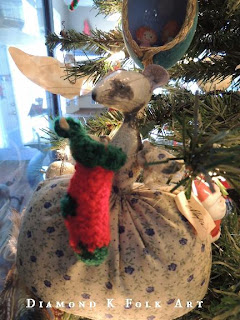 The little stockings my Tressa made me are not safe either! 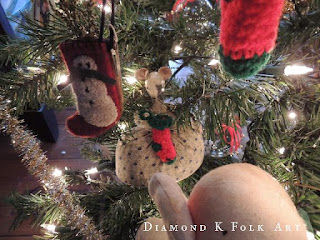 Freeze! Ahhhhhh but I still see you Darling. I think if you hang a stolen stocking by the fire, Santy Clause must fill it with a lump of coal...dont you think? 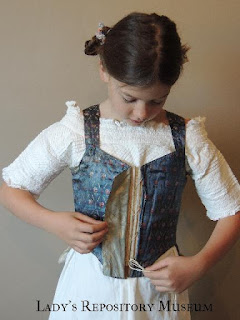 Emma is modeling a young girl's soft boned bodice, c1785-95.   This would have been worn as part of a gown, fully visible, with matching sleeves that pined onto the straps. It looks a bit wonky because Emma is wearing a later mid 19th c boat neck chemise underneath of it, instead of a proper shift. 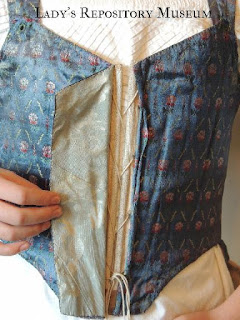 Designed to grow with the child , the front lacing opening is covered by a wide flap that pins closed over it~ so as the child grows, and the front no longer touches when fully laced, the flap will cover this.  I have seen rare maternity stays with this feature as well, but to this this bodice's tiny size, and the fact the straps have two sets of eyelet holes as well, this is most definitely for a growing girl 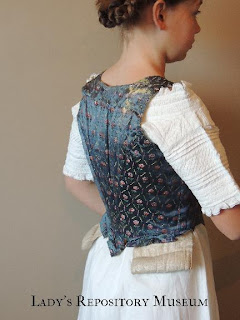 There are horsehair pads stitched to each side in the back to help puff out the waistline of its matching skirt~ long since gone.  Note the sort of 'hump' you can see going across her shoulder blades horizontally,  this is not a seam, but where the boning in the back stops for the bodice straps to ease over the shoulders 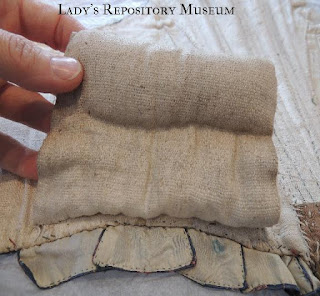 The pads are stitched of coarse linen and stuffed hard in the ends with horsehair.  There is a line of stitching to keep all stuffing in a neat little roll at the end of the pad 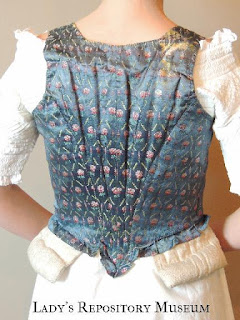 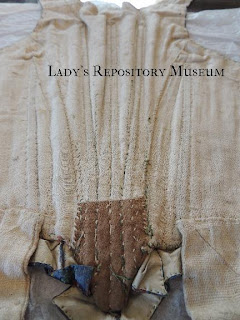 Do not confuse a soft boned bodice for a set of stays. From the inside, it looks like a set of boned stays, and is constructed in nearly the same manner, but the outside is covered in a figured silk.  The reason I say 'soft boned' is because this bodice is ONLY boned at the back and front, with no fill at all in the sides 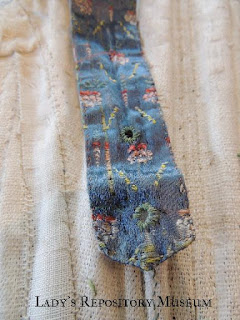 The shoulder straps have two sets of eyelet holes, Emma is wearing with them pined at the first, or shortest position. As a child grew, they could then move the straps to the outermost eyelet hole. Of I what I have seen of these early garments, most  would knot their shoulder straps somewhat permanently~ some even stitched them in place, and then would only have to do up the front or back laces of their stays or bodices when worn 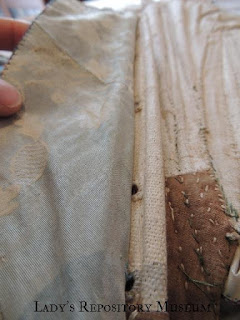 The inside of the front flap is a gorgeous early 1740 powder blue silk damask, and not entirely one large piece either, but made up of several smaller pieces joined together, which again is fitting for a child's garment~ many were made from Mamma's olde cast off gowns 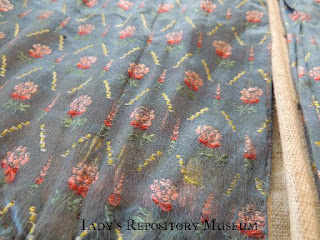 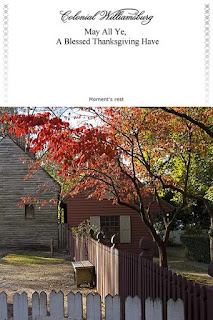 Tomorrow I will officially sit and Give Thanks, but truth be known, I  Give Thanks each and every day. I am Blessed with health and family, and a host of kindred spirits that share in what I love~ you all are my Blessings, so consider yourself counted!   The above is a wonderful postcard from Colonial Williamsburg~ they have tons of gorgeous photos to pick from, and all can be sent thru the email for no charge~ a wonderful gift they provide~ if you would like to send your own Colonial Greeting, you may go to the website here~ http://www.history.org/postcards

Happy Thanksgiving!
Posted by Rachael Kinnison at 11:52 AM No comments: