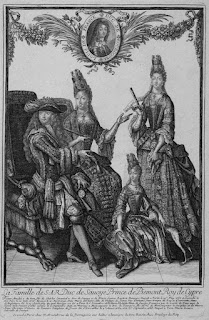 Today we get both a look at some precious bits, as well as a possibly new vocabulary word for you~ 'Fontange'.  If you are interested in early fashion, you may have seen the tall lace head pieces, as seen above, and wondered what they were called. The Fontange is a term used to describe the tall front facing headdress that was popular for a very short time to the end of the 17thc~ apx 1680~1700.  It is named for one of King Louis XIV mistresses, the Marquis de Fontange. She is said to have lost her cap while hunting with him, and the way she hastily tied it up, he liked, so other members of court swiftly followed with the new fashion. Pieces of lace literally jetted upward from the front of the head, and were supported with wire to keep them standing. Many had lappets to each side, the length of which also told the social status of the wearer.  In the engraving above, a young girl is shown wearing a smaller version of the Fontange. 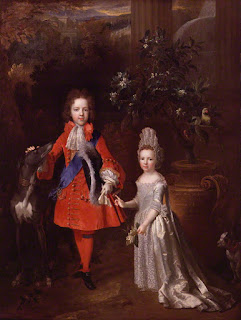 Above is a painting, done in 1695, of Prince James and his sister, Princess Louisa Stuart. This is so far, the youngest depiction of a Fontange on a child I have found..but if they were so popular with both adults and children..certainly babies would have had their own version.... I have seen just one small bonnet before in a private collection with a Fontange front. Until now, I can say~ 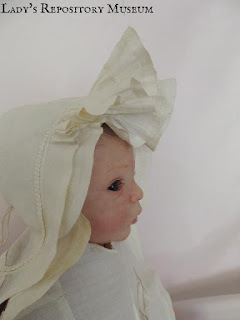 Livy is happily modeling a newborn Fontange for you~ actually, two separate pieces, both from a marvelous 32 piece swaddling set that contains not only two Fontange caps, but two staybands as well.  They are of coarse a bit limp, as I believe they would have been starched to hold them erect when originally worn. Pretty stayband would have also been pin'd to her shoulders close up to the face, to keep her little head from wobbling about. 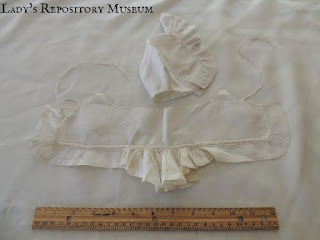 Atop this picture is the little cap she is wearing, and below, the stayband.  Many today mistakenly think of a stayband as something worn round the middle, such as a 'binder',  but in the 15-18th centuries it was a band of cloth worn over the head, long enough to reach both shoulders on a swaddled baby, and was pin'd at the shoulders to keep the head still. 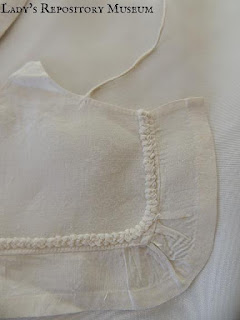 The stayband still has its original back ties, and as well, one of the little tabs can be seen to the top left~ this was pind to the cap at the back of the babies head. The ties fit directly at the nape of the babies neck. 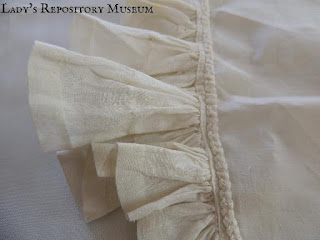 Since there are no known images(to me) of a swaddled infant with a Fontange cap~ if you know of a source, please let me know!  I am experimenting with the pieces and trying to figure out how they would have been worn, and think I have it correct above on Livy~ she wears a long bib first, with cap over that, and then the stayband on lastly. It is the only piece with tiny pleated trim, as seen above.
Posted by Rachael Kinnison at 12:51 PM 2 comments:

an Heirloom Quality Box on eBay this week

One of a Kind Flemish Slide Top Spool Box

I have been working on a special, Heirloom quality box to offer and have it up for sale this week on eBay~ you can find it here , or click the link in the sidebar to me eBay specials.   I have over 42 hours of work into painting this box, aside from actually making it, and finishing the isnide.  I wanted to make something special, that there will only be ever just ONE of~ so if you like it, feel free to bid on it!  For the hours I have put into it, the start price is a steal of a deal~ I challenge you to find anyone else to produce a nice slide top box and paint it for less~  So many times people will not bid on my eBay auction, and instead ask me to make them one of whatever it is I have offered~ not so on this piece. I will not take orders ~ this is the ONLY one

If you want something really special and pretty to hold your stitchy needfuls, that no one else will EVER have~ please, go check it out!
Posted by Rachael Kinnison at 12:16 PM 1 comment: