Inspired by early 17th c Flemish embroidered cabinets, I have designed and finally finished stitching the model for my Flemish Christmas ornament~ its so very delicate and feminine~ you will want to keep it out all year long! It is safe to say that this will be the first in a series of embroidered Christmas ornaments~ I am planing on designing a new one for each year, with the full kit for each being available for that year only. Ill be posting details about the kit soon, so keep checking back if you are interested! Let me know what you think!
Thankyou too for all the well wishes, I am feeling much much better! 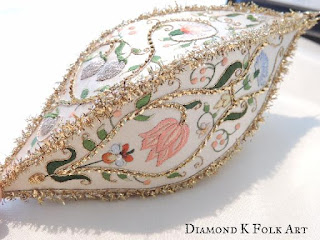 on eBay this week!

One of a Kind Strawberry & Distlefink Thread Palette 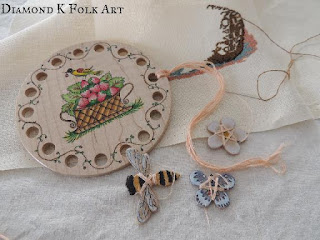 If a stove has four burners on the top... or six or eight..no matter, I got them all going right now!  To say I am currently running in overdrive would be an understatement.  My focus for this past month has been to get my model for my new Flemish ornament kit finished....cant offer a kit with no model!!!! I have it 'just' about finished....along with my slate frame orders.....then there are the 6 dollys currently on the table...some a little more cheeky than the others....and then...well....the elephant. I thought I would have more time to finish my elephant.....what elephant you say????  The elephant! So many of you know I will be teaching a 4 day workshop at the 2017 Bath Textile Summer School~ what will I be teaching...well...that is the elephant! Turns out the pamphlets will be printed in April, so I have to have elephant finished by end of March!  She is coming along nicely, and I am really really really excited to show her to everyone...but not yet! Not till she's finished...and to get her finished by end of march I am definitely burning the candle at both ends....and in the middle! Pray the bead Gods will be kind to me and Ill not spent too many hours hunched up on the floor, with my nose to the ground, picking up spilt beads!!!  Oh ya...I am hooking a rug too....(what am I crazy???)  So all of this and I still have to make my car payment, so if you like the palette above, go check it out on eBay! You can see it here... or click the link to my eBay auctions on the right.
This palette is really special to me~ youll see why if you read the auction~ Im off to go stab some beads!

Posted by Rachael Kinnison at 10:22 AM No comments: 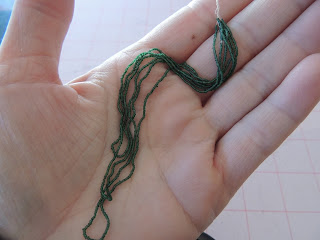 Couldnt help to put this picture on~ arent they beautiful? I left the photo large so you can click on it~ these tiniest weensiest little antique miracles of glass will be among the special beads to grace my flat top casket.....the entire outside of which will be nothing but beads, glorious beads! There will be unicorns...there will be fountains.....there will be sea horses and fish...mermaids and grottoes....lions, angels....flowers...birds....and snails snails snails....my entire frieze is snails!  Keep an eye on the blog for little sneeky peeks as I work along.
And speaking of working along..... I have finished all the silk work on my Flemish ornament, and am on to the goldwork~ so soon will have the model finished for my next kit to offer~
May your needles work sharp & swift~ Happy Stitching!
Posted by Rachael Kinnison at 7:51 PM 1 comment:

For those muddy, Spring Dayes..... 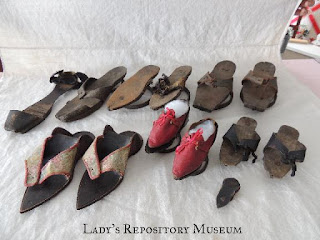 I was going through the storage repacking this morning, and pulled some fun things to share that I don't think I have ever put on the blog before. Most folks know I have a 'thing' for early shoes, especially children's shoes....but even moreso, I am absolutely fascinated by overshoes. I pulled a few above so they could be seen together, and in looking at them as a group their differences can be admired.  Before rubber overshoes were made in the mid 19th c,  there were a number of shoes available to help protect ones 'good' shoes from mud of the countryside and filth of paved city streets. As times changed, and shoes changed shape, so did the overshoes that were meant to protect them. I use the term overshoes sloppily~ technically, there are three terms used to describe protective footwear~ 1. Pattens. These are made of wood, usually Alder for its ability to resist rot. The wood sole is raised up off the ground by a hand forged iron ring...now even then, the term ring is a bit generic, as the shape could be an oval, an hour glass shape, a funky scallop shape and I have even seen hearts.  These had leather or cloth latchets or straps attached to the soles, that fit up over the shoe and tied, to keep the patten on the foot.  The second term is 'Overshoe',  which was a wood or cork flat sole, fit with either a toe or heel cap, or both, with the sole being hinged in one or two spots for more flexibility in walking. One would slip their foot into the toe cap, and there was usually a strap or tie round the ankle to hold them on the foot. The third type shoes were called Clogs, and usually were made together with the shoes they were worn with~ in matching pairs. Clogs soles were entirely of leather, with latchets that fit up over the shoe and tied to keep them on~ they sound alot like Pattens, but are quite different. 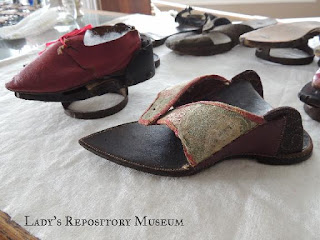 In this photo, one can see a child's wooden patten with its red morocco leather shoe behind an adult clog. As you can see, the clog sits flat to the floor~ there is no instep, and no iron ring underneath~ the entire sole of the clog makes contact with the floor. 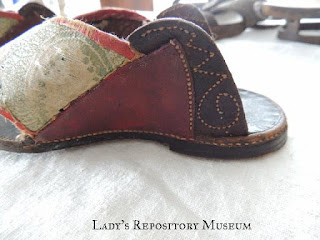 Clogs were common the first half of the 18th c, and by the wide shape of the heel and pointy toe of this pair, I date them to 1740. Entirely hand stitched, they really are a wonder of the shoe makers art 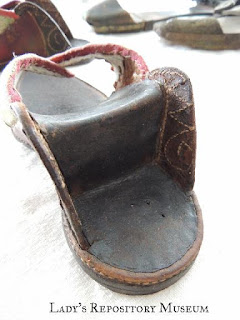 Lady's shoe would have fit exactly into these, with no sloppy room to spare 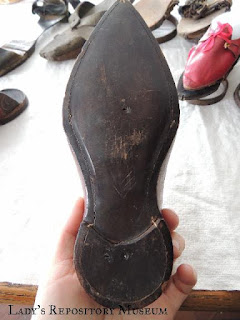 A tiny bit of a heel, and minimal wear to the soles~ these were a wealthy womans clogs, and they probably never touched the actual dirt in their lives. 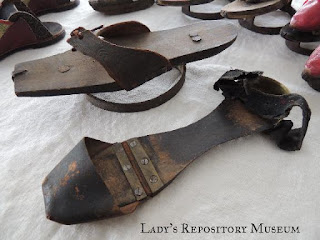 To date pattens, the shape of the sole is most easily used~ as they followed the shape of shoe soles closely~ the patten to the rear in this photo dates to the 1840s, with the overshoe to the front, c1820-30. 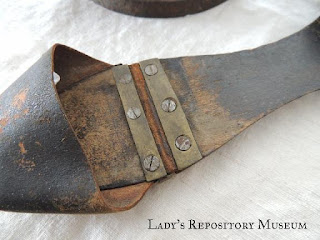 I have found hinged overshoes to be exceedingly rare, as the leather of the hinges would get dry rot and they would fall apart and get thrown out. Two brass strips are screwed down over a strip of leather, and in the day, could be changed out by removing the screws in the brass strips and replacing the leather strip. I have seen some overshoes with two hinged areas, mine just has this one. 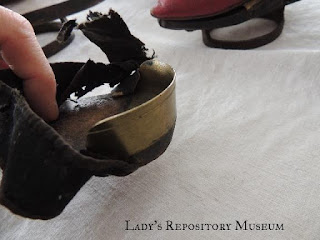 To the heel, there is a polished brass heel cap, beneath of which the cloth strap is attached 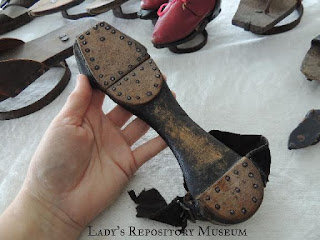 This overshoe has its leather sole nailed on with iron nails, of which have discolored the leather around each one...they stick up a bit, and kind of feels like nonskid as one slides the hand across them...I cant help but think they were meant for a little added traction on a slippery ground.