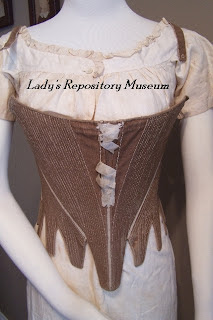 These snapshots leave alot to be desired, but thought you would enjoy them just the same. Alas, I thought I had found the perfect 'girl', but, as you can see.....she is much to well 'endowed' for my stays to fit properly.............my quest will continue! Being a private entity, I just cant afford the 2-3 grand for a correct 18th century form mannequin of proper posture~ I'd rather have another dress. I think you can get a goode idea of what these stays looked like when originally worn. 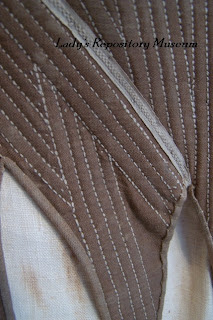 They are in immaculate, near mint condition~ fully lined in a crisp, original cream linen. Entirely hand stitched over whalebone strips~ too numerous to count. They are so very rigid~ a sheer monstrosity when it comes to trying to store them..........yet, when fitted and laced, they twist and turn in all the right directions, and mold the body like butter. Because of the sheer brute strength needed in the hands to stitch them, nearly all staymakers were men. 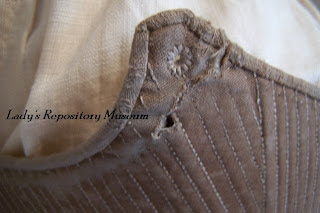 All the back lacing eyelets are precisely stitched in white linen, as are the lacing eyelets for the shoulder straps. The main reason these stays don't fit well on a modern form, is the placement of the shoulders~ 18th century posture dictated the arms and shoulders held way back~ all the time~ it was common the shoulder blades to touch each other. While you are sitting comfortably at your computer, take note of your posture, and now, sit erect and jet your shoulders back as far as they will go..........until it is uncomfortable~ chances are, your posture still would not be correct~ hence the need for stays~ they sucked the waist IN, narrowed the ribs down to a conical shape, and thrust the bust UP, pushing the shoulders back until they could go no further. 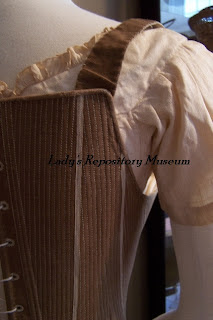 I love how contrasting thread was used, and major seams taped in same~ a true work of art. 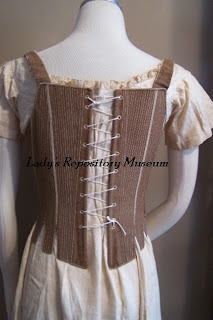 It was more common for the back lacing to start at the bottom, and continue up skipping every other eyelet~ then once at the top turn around and lace back down to the bottom......but these have clear wear marks of where the laced originally laid, and I have laced them in that fashion 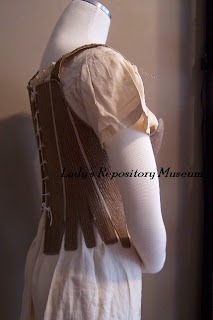 The tabs at the bottom not only eased out prettily over the hips, they also gave 'displaced flesh' a place to retreat to
Stays shown over a later 1790 linen shift 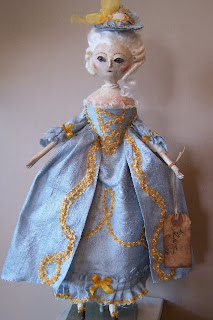 Next commeth September?????????? Allready? Where did the summer go? We have been very busie here at the LRM~ I guess it has put me in a time warp...seems like just yesterday the children were ancious for the last day of school. Lately all I have been hearing is 'Mom~ when is school going to start?' Come Sept 4 they will be on their way again...........at least I will have lil Pippin here to keep mommy & dollys company! I have some wonderful new things here at the museum that will be getting their photographs soon to share.....and of coarse some new dollys! 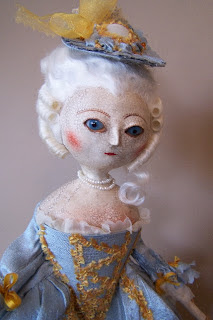 This is one of my favorite Queen Anne dollys~ Mifs Thankful Purdy. I always have adored the name "Thankful".....one of the original passengers on the Mayflower had this name, along with a brother, "Wrestling". Being a mother of 4 children myself.....I can get a pretty goode idea of why that little fellow was named 'Wrestling'............. 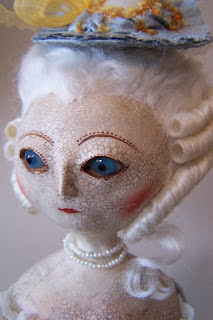 I had planned on selling Mifs Thankful........but truth be told, mommy likes her an awful , awful lot. We have had a long discussion, and she will be staying here with me! So, since space at the Inn is always limited, I will be listing a very, very special girl up on eBay this night~ I hope you will stop by and take a peek at my auctions & support the LRM!
Posted by Rachael Kinnison at 4:31 PM 3 comments: 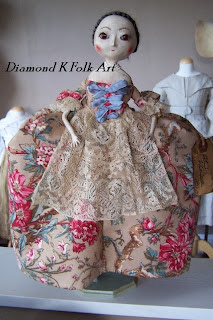 This is my latest Queen Anne doll~ if you like her, or would like to see 'more' of her, she will be offered on eBay sometime this week! 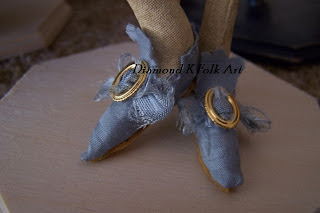 She wears an exact replica of a c1745 sack dress out of a gorgeous reproduction cotton chintz, with apron and engagents of antique lace. Her real shoes have leather soles and lil brass buckles with silk bows...... 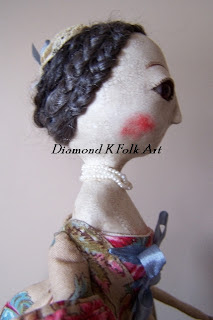 She wears 3 strands of real pearls around her neck, has real inset antique brown glass eyes, and I have given her coils of real braided mohair. You can just barely see her antique lace tippet in the profile there~ this is how a Ladye of 1745 actually wore her hair 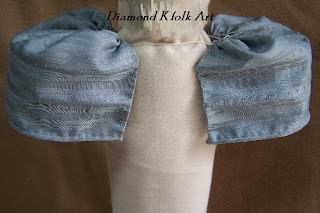 No sack dress would be complete without a proper set of pannier hoops~ I snapped this picture of them before I dressed her..........shhhhhhh~ don't tell! They are blue sateen stripe cotton hand stitched over wire hoops; the pattern taken from an original 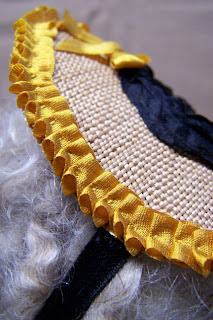 I awoke early this morning to the normal chirping of the hummingbirds outside my window....when I realized, that I had not opened that window evening last.......and as I rolled over in the bed, a whisp of a shadow caught my eye, and I was suddenly betwixed................. 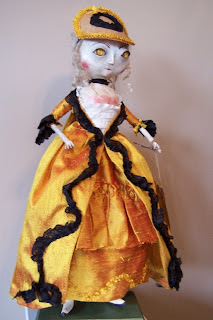 As my eyes focused, I had indeed seen what my mind 'told' me I had seen.......a special visitor~ oh how I do love visitors! She was a very mysterious creature.....very polite, but quite reserved. Tituba regailed me with many tales of her travels,and how she had been told I kept an "Inn", and if she may stay a while. How could I resist? One soft gaze into her bewitching eyes.......and I was smitten with her. Every move graceful and planned...yet she was hiding something I could tell..................... 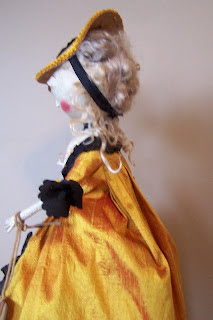 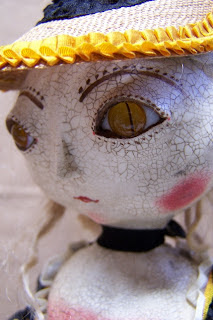 I lead her down to the Inn....we sipped a cup of orange clove tea, and she slipped silently into the shadows......I believe I have indeed been visited by a Witche....tho she wants not her full "Tale" to be revealed.....yet......if one catches a glimpse under her skirts, the true "Tail" shall indeed be known 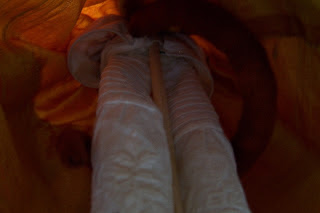 It is dark, but you may just be able to make out what she has wrapped secretly 'round her legs.....shall I dare ask her to reveal the Tail????

I am so proud and honored to have this little gem here at the Museum. Boy's clothing from the 18th century is as rare as a hen's tooth.....and to have a piece this early, takes my breath away. This is what would have been called at the time, a shortcoat. Made for a little boy younger than 4 years olde~ he would have been given this shortcoat after learning to walk~ as there is no evidence of leading strings.

The front has a mock tabbed waistband edged in green silke. After the age of 4, little boys would have graduated up to a frock~ which is essentially this same idea, but bodice and skirt would be separate, and bodice would most likely be boned, ( stiffened with whalebone). See how symmetrical the design of the silke has been pieced? This was the norm throughout the entire 18th century~ this symmetrical design concept~ everything must be even, and patterns of brocade matched perfectly.

Here is a side view of the sleeve, open at the cuffs with hand sewn eyelets and original laces. Just above the cuff is a separate 'wing' cuff.....it makes for a stunning silhouette

Wing cuff back view. The silke on this piece is still very bright and in excellent condition. Unlike 19th century silkes and early 20th century Edwardian examples that were thin and weighted with chemicals....18th century ones are pure silk, very dense and heavy, often pieces could take months to hand weave, spending 12+ hours a day at the loom.....making them extremely expensive and valuable. When a person dies in the 16-1700's, their estate was inventoried and divided as per their will to their heirs, with textiles and clothing often being more valuable than land & furniture property.

View inside the cuff~ entire coat is lined in taupe silke

This design of silk is referred to as 'bizarre', due to the large foliate design of the weaving

Entirely stitched by hand, one wishes they could see who originally laid these fine stitches

Back view showing eyelets for lacing~ original laces have vanished. I hope you enjoy a peek at this very rare little work of art. 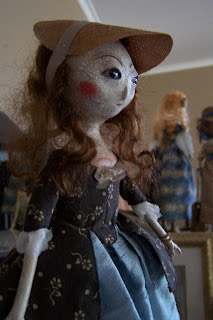 I hope you will stop by the Primitive Gathering on the 15th~ Precious Little Marie Twisp, above, will be anciously awaiting your visit~ she does so like to meet new friends~ so if you have a moment, please come by and set awhile......

Switching to the Museum, I must apologize for not updateing the blog more often~ I dont know where all the time is going to, but I guess my Mother was right....as you get older, time does go quicker! I have some new 'girls' on their way for display, and hope to get some pictures up soon~ 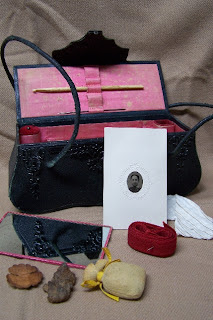 Most everyone has heard of time capsule~ you take a box, fill it with neat things of the day, and bury or hide it away for someone to open years down the road. Those are GREAT fun to do...but I always thought they were a bit phony~ because people only put things in them that they want others to see. My favorite type of time capsule, is an accidental one... one that just happened. Above is a gorgeous c1863-4 pressed paper sewing purse, filled with treasures from its original owner, Edith Crary 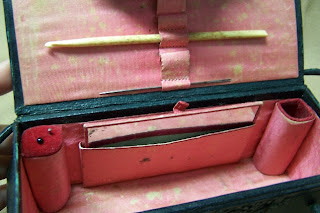 Sewing purses like this were very popular during the Civil War era~ this one is constructed very much the same as daguerreotype & ambrotype cases of same period~ meant to emulate the more expensive gutta percha, but made of a pressed leather~like paper, which made them more affordable & available to most the working class. Its interior is padded and lined in red silk, with fitted compartments for its still present mirror, thimble, little red velvet pin cushion, and several slots in the lids for needles and hooks. The double handles are rolled leather. 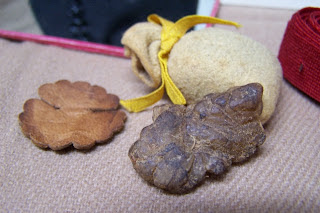 Here is Edith's doe leather pounce, stamped leather thread winder, and sewing wax. I love this lump of beeswax~ look at all the grooves in it! I could sit and dream all day of what sort of threads she passed thru this bit of wax, and what all the threads were sewing on....... 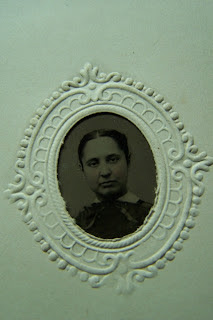 This gem size tintype was also contained in her sewing box~ on the back it reads in period script "Edith Crary", and impressed in gold gilt on the top of her sewing box, "E. Crary" 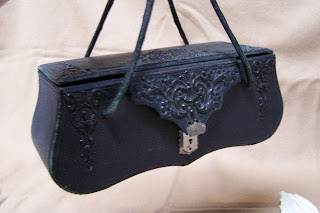 Do you think she would have thought all those years ago, that just her ordinary sewing box would be such an important gathering of information? That from it, as well as its contents, we could take a very rare look back to her day, and its common utilitarian tools? To gaze into her mirror, and "know" that she herself once looked into it as well~ priceless!