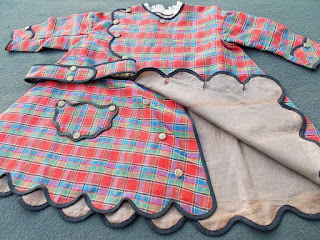 Would you know one when you saw it? I thought I would share this piece with you all, in hopes that perhaps you will think twice the next time you quickly assume that A~line post Civil War era 'dress' you are looking at is a girl's paletot (generous fitting overcoat). There are several clues straight away, when I saw the photo above, that immediately told me this was a tunic or boy's jacket, rather than anything for a girl.  Do you see the belt? Obvious clue number one....girls 'usually' did not wear a belt over a paletot, not this early anyway...(to the mid 1870s they did wear belts over their elaborate overskirts).
Do you see anything else? Obvious clue #2 is the asymmetrical front~ if you see a bodice with asymmetrical front, you should hear a little voice on your shoulder screaming boy boy boy boy! 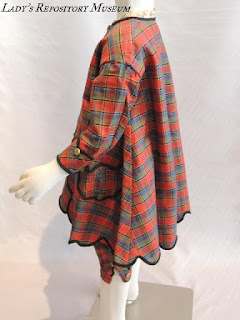 Of coarse obvious clue #3 is the trousers.....but what if your piece is not still matched with its original trouser bottoms? The above silhouette I have seen time and time again in period displays misidentified as a girl's dress or coat. 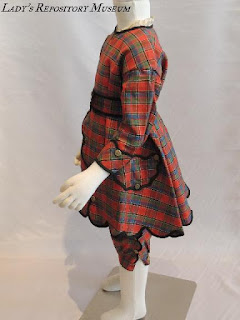 Adding the belt, one can immediately see the change in character of the entire ensemble 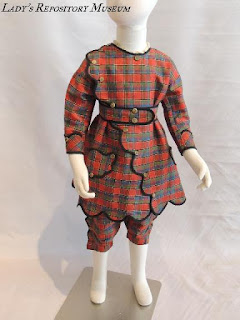 Even boy's clothing of the 1860's used an enormous amount of fabric to obtain the fullness of a period correct silhouette. 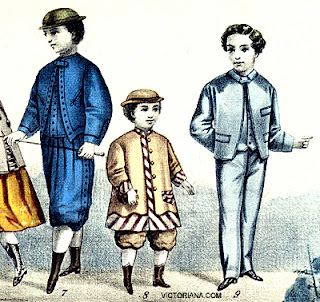 This is a excerpt from the Butterick & Co engraving ~Spring & Summer Fashions of 1868. I love group engravings as they show the difference in dress for different  age groups at the same time....(and for same reason I love early 1840-60 class photos)
Young boys would first wear dresses, then as they aged, would go from knee length trousers to pants ect ect..
One can see a slight resemblance to our fellows suit in the yellow one in the center above 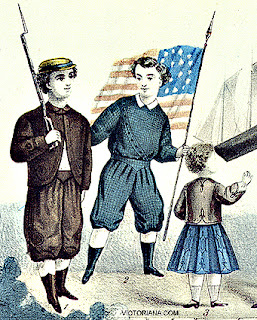 The boy in blue, in the center above, shares elements and details with our suit~ the pointed waistband on the knee length trousers, and the asymmetrical design on his shirt.  One rarely comes across an exact match in an engraving, but there are enough detail matches to firmly date our little suit to the 1868 period. 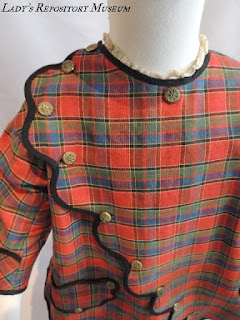 The little fellow who once wore this suit was from a prosperous family~ one need only count it's 36 matching  gilt brass buttons.....18 on the top, 2 on the belt and another 16 on the trousers~ the cost alone at the time for just the buttons would have been more than what some folks made in wages for a month. 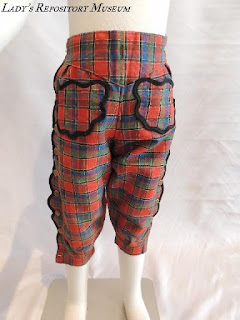 The front of the trousers have 2 cute functional pockets that match those on the jacket. There are no fastenings at all on the waistband~ it would have originally buttoned onto a shirt. 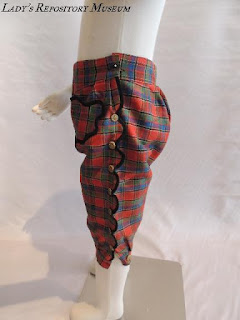 The seat of the trousers cut full for nice range of motion (you had to squat to play marbles after all....)...and all those buttons, save for the last one at the knee, all are decorative. 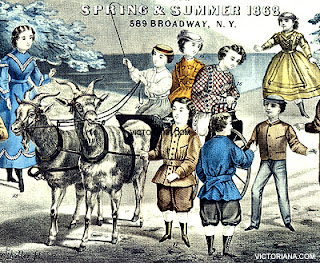 Folks say boy's clothing is so rare, when actually, there is just as much out there as girl's clothing....it's just misinterpreted.
Posted by Rachael Kinnison at 1:13 PM No comments:

on eBay this week~

Marida, a One of a Kind Queen Anne Dolllye 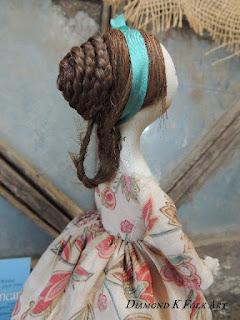 If you would like to say hello, or perhaps place a bid, she is on eBay this week here
Posted by Rachael Kinnison at 8:53 AM No comments:

Getting Back to Work 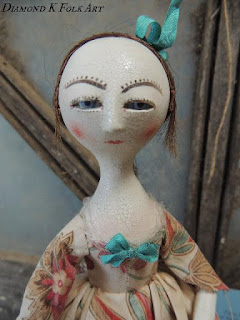 It does feel good to get back to work. I havent been of mind to do much lately, everything seems overwhelming and I havent been able to concentrate like 'normal'. The children have been keeping me busy~ Emma got her first elk a bit after Christmas, and Josh has been building a forge...hes out there now hammering away and I see a nice butter knife with rebar handle in my future....
Got a few dollys finished.  I think the expression on Marida's face is a direct reflection of my own...kind of ho hum.....waiting for a nice cup of tea.  I wanted her to look primitive...like something Mamma would have made for her little girl from things found round the house...her clothes are hand stitched from late 18th ~ very early 19th c print from a quilt back portion 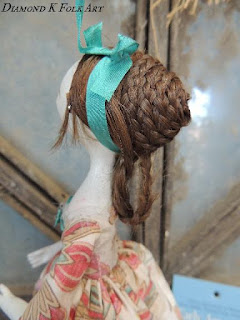 I gave her a wig of real human hair...not my own. I have all sorts of antique hair that was saved probably for hair jewelry, but never got made up. Sometimes I use my own hair, but I liked this color, its dark but has kind of red hue to it if you get it in the light and goes well with her complection. Its stitched on over a cotton skull cap, and yes, I sat and braided it by hand.  I like how it came out, simple, but with lots of character. She will go on eBay later this week. 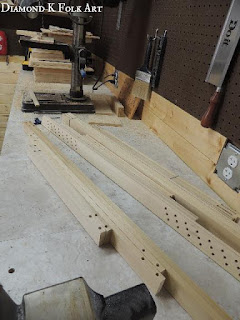 My work has stacked up over Christmas,  this past Wed. was my first full day of work back out in the shop, and I have to say, it did much to make  me feel better. I love to work wood, I really do. Drilled out 17 slate frame pairs and have started to saw out the mortoises 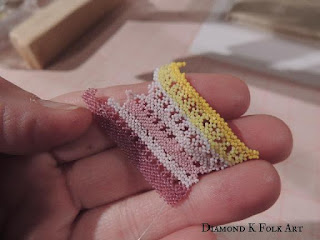 Of coarse I was working on my casket when lil Biskie got hit by a car, so it has been extremely difficult to get back to it since. I was working on a specific portion of the angel's gowns (where was mine & Biskie's when he needed it???) so I have added some little brown beads that are same color as his little nose in that spot.... It's been too hard for me to concentrate to count beads since,  and these are so small, I just can't see them when my eyes well up.... 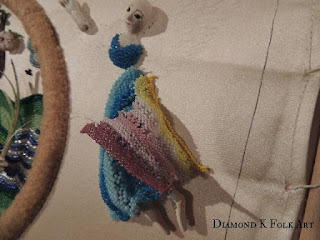 But I had these pieces done, so I have gone ahead and stitched them on to finish their gowns....minus the sashes 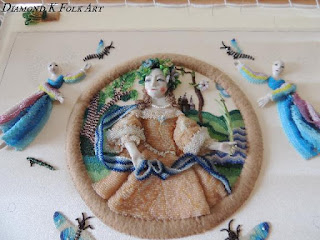 I don't think I like them very much, honestly, but I'm not taking them off. Perhaps when they get their hair I'll like them better....I'm not diggin little baldies...or maybe it's just angels in general.... I don't know. 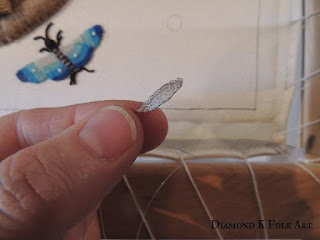 But before I can do their hair, I have to make their wings....so for the next while, I'll be making feathers....well over 100 I need, of differing sizes...the small ones take me about 20 minutes to make one, so it will be a while.  I have decided to make the Quiltmania 2018 Mystery Quilt this year, because I have been feeling a need for patchwork...so am very much looking forward to that starting the end of this month.
Posted by Rachael Kinnison at 9:55 AM 2 comments:

Having a Hard Time 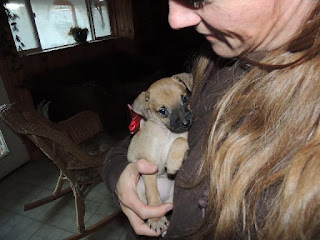 My precious little Prince Biscuit passed away on the 23rd Dec, and I am still having a hard time trying to keep it together. He wasn't just a little dog to me. My husband said to just say there was a death in the family, and leave it at that to avoid people rolling their eyes that I could be so upset over a pet. But I'm not like that...frankly, I could care less if someone rolls their eyes at me....and if they did, they dont know me anyways.  My oldest daughter gave me Biskie for Christmas in 2014, and hes been literally with me, by my side ever since. I just cant believe hes gone. My heart isn't broken, its crumbled into dust 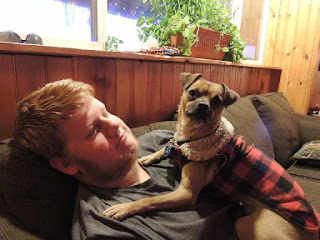 It was a horrible Christmas...husband kept telling me to find happiness for the day, and I tried, but cried the whole day, children did too.  It's not the same without him~ hearing the jingles of the tags on his collar~ him getting the zoomies and running all over the house, constantly squeeking his toys or scooting them over the floor.  Bedtime is horrible, as he always told me it was time for bed by getting up and scooping on my pillow~ he slept on my pillow(not so much room for me, but I didnt care) or between my feet...and now hes not there 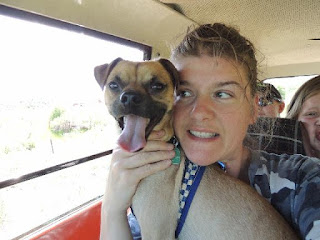 This summer when we went to Yellowstone, our olde Pyrenees Yetti, and my little ferret Flick both passed away. That was hard, but they were both very old, and we expected it, they both had long, happy lives. It was too soon for God to take my little Biskie....I still dont understand what I ever did wrong, that he would give me such a blessing, and then take him away.

Posted by Rachael Kinnison at 8:04 AM 3 comments: