Queen of the Shadows~ 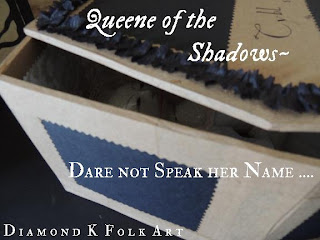 I am so excited to share her with you all~ I have been working on her all the summer trying her get her just  as she has been living in my mind's eye for so long~ her name is "Cybl"....and you can see more of her on eBay here~  Cybl on eBay .  I absolutely adore her!
Posted by Rachael Kinnison at 3:38 PM 1 comment: 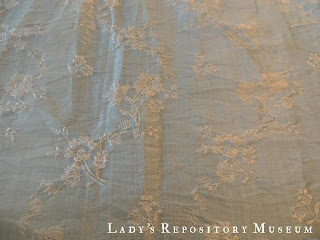 Often assumed to be brocade, the above is a wonderful, dainty and most feminine example of a figured lustring.  In case you have heard the term but are unfamiliar, here is an excerpt from Silk Designs of the Eighteenth Century by Natalie Rothstein~
'The lustring was produced from the late 17th century to the early 19th century. Some of the most successful English silks were lustrings, they were a favorite export to the American Colonies and many of the designs by both Leman and Garthwaite were intended for them. It was a light crisp silk woven in a fine tabby with a special quality, a high lustre on the silk imparted by the process of lustrating the warp before weaving.
The warp was stretched and heated having been coated with beer or something similar. Some accounts suggest that the silk was heated, stretched and glazed further after weaving.'

This particular piece is a fragment of a dress panel, a full 26" loom width, with pinked bottom edge and top edge with remains of the original waistband pleats.  What makes this a favorite of mine, is the floral design that was masterfully woven to resemble Dresden embroidery, so popular at the time this was woven, c1742. 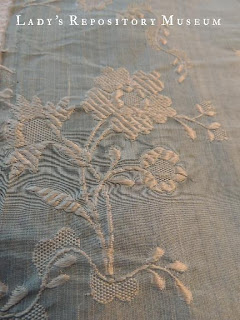 But what actually makes a figured lustring different from a brocade you ask? The pattern is woven from the weft threads of the ground, there are no threads carried from one motif to the next~ the next photo is a back view~ 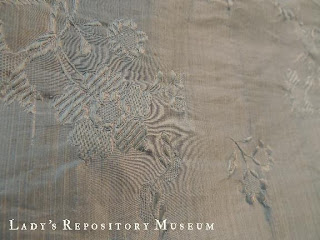 Figured lustrings such as this were fairly expensive, but very popular with all classes of  ladies~ the fancier the designs, the higher the price~ and of coarse, they came in plain (unfigured) and striped as well. 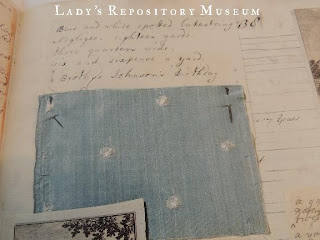 The above is a spotted example, in the same colors as mine, from Barbara Johnson's Album~ she used 18 yards of it for a negligee she wore for her brother's birthday. 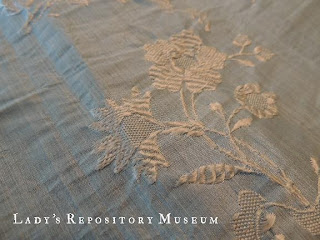 So light and crisp, and paper thin.

Here is another example of a 'strip'd and flower'd lustring' in her book a few years later~ no yardage is given on this one, but same type dress, so one can safely assume she would need that great of amount as well. 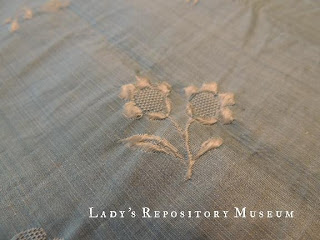 quite hard to photograph, it still does have a wonderful shiny appearance~ quite unlike the pressed out pattern of a watered silk....and not as shiny as say a glazed chintz, just very lustrous~ hmmm...I guess that's why its called lustring ;)
Posted by Rachael Kinnison at 4:13 PM No comments:

A Clown for Hallowe'en! 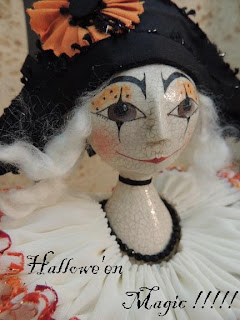 Perfect to get you into the Hallowe'en spirit~ my wonderful Queen Anne Clown is now available on eBay!  I am super thrilled with how she came out, and so excited to share her with you~ you can see her on my eBay specials page~ link is to the right :)
Posted by Rachael Kinnison at 3:21 PM No comments: 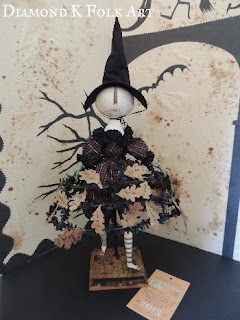 Sallye is new and available this month on the PFATT Markeptplace.  Her boxwood hoopskirt is adorned with paper oak leaves, each with a special herb and remedy from Culpeper's 17th c Complete Herbal~ if you have a moment, drop by and say hello!
Posted by Rachael Kinnison at 11:58 AM No comments: 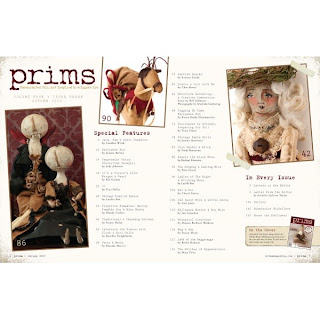 Hasn't the summer flown by!  We just arrived back from an absolutely fabulous trip to Yellowstone National Park~ I have so much to share with you but first I thought I'd let you know my Pumpkin Eaters will be featured in the upcoming Autumn issue of Stampington's Prims Magazine! 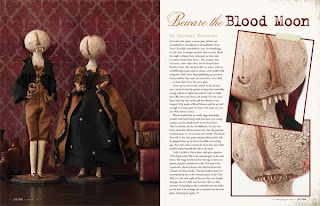 Its a fabulous issue~ full of both Halloween fun AND Christmas goodies~ leave it to the fabulous editors at Stampington to flawlessly mesh Halloween Ghoulies & Christmas Merriment all in the same issue!  I introduce my special Punkin Eater special edition dollys in my story, 'Beware the Blood Moon' .... and tho it sounds ghoulish, the blood moon, if you are not familiar, is the first full moon after the Harvest Moon.

The new issue will be available at your favorite bookstore the first of September, and if you just cant wait, you can order one directly from Stampington here~
http://stampington.com/publications/whats-new-coming-soon/Prims-Autumn-2013
Posted by Rachael Kinnison at 8:16 PM 1 comment: