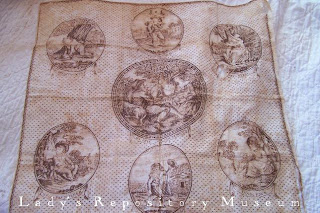 I have several early children's handkerchiefs, but this one is by far my favorite. These earlier ones, 18th c up to the 1820, were larger, and oft printed with some sort of instructional verse, so that while the precious one was riding in the wagon to school...sitting in church or the like, they could reach in their pocket and pass the time 'learning' a life lesson, or reading their Sunday prayers. This one measures 19x18" 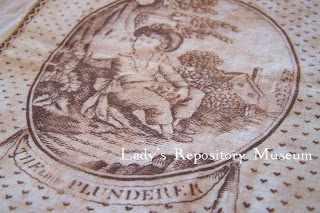 My views of early handkerchiefs, is that they were most likely used to 'pat' ones face, wipe away a tear maybe, used to wipe the fingers upon....certainly not to blow ones nose upon! Plain linens would have been used for that, and in a private, not a public place. I am sure there was an element of 'showiness' involved too~ who could have the latest beautifully engraved kerchief.... 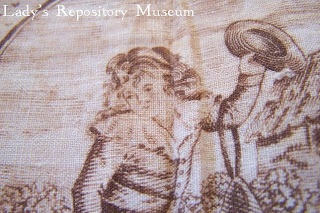 These medallion types were very popular in the last quarter of the 18th c, and were printed on fine linen and cotton with very intricately engraved copper rollers, just one color printing~ brown, indigo and red the most common colors. 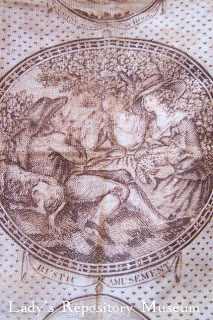 This handkerchief is very fascinating if studied closely~ not only does is show wonderful late 18th c fashions, it gives a little glimpse of what the average person did in their free time....what they did to amuse themselves... the largest central medallion shows older teens sitting under a tree, the boy leaning on his dog, one girl holding a lamb, and the other a bird 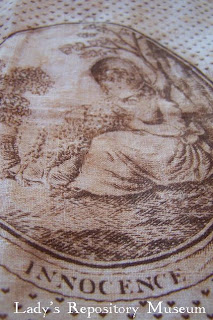 This one, titled "innocence', shows a sweet young girl feeding a curly haired sheep and apple 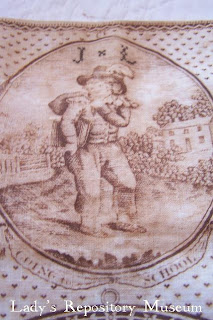 The medallion directly above center is titled 'Going to School', and shows a dapper clad boy on his way, with his books in tow & lunch sack over his shoulder. The initials "J * L" are cross stitched at top center. The medallion directly below center, is titled "Returning from school", also showing a boy. This handkerchief would have been meant for a boy, as all but 2 of the pictures depict boys , and the 2 with girls show them from a gentleman's point of view~ this design most likely had a sister, one meant for girls, that depicted them doing various ladylike endeavours. This is also reinforced by the social standard of the time, that girls were, if at all, educated in the home, and not sent out to school 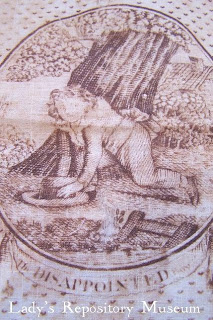 'the disappointed boy'...looks as tho he has tripped and fallen, perhaps in front of a girl, and caused himself great embarrassment 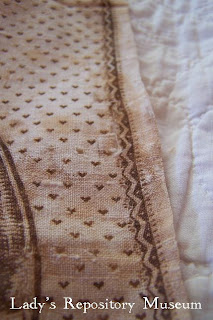 This has been cut from a larger panel of 6, hand hemmed on 3 sides, with one salvage remaining~ you can see it is printed around the edge with stitch marks even, so one has to look very closely to tell a raw edge from a hemmed one.

Posted by Rachael Kinnison at 9:37 AM 3 comments: 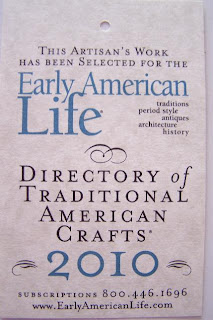 I am absolutely thrilled to be chosen again this year for Early American Life's Directory of Top 200 Early American Craftsmen~ Thank you to all the judges, and to Early American Life Magazine for bringing such a wonderful directory together. The 25th anniversary issue is on newsstands now, and can also be viewed online~

To celebrate, from today until the end of June, I am having one of my wonderful "MAKE ME AN OFFER " sales! I LOVE running these sales~ its a great time to try a piece of Diamond K Folk Art if you haven't already~ it all helps support the Museum~ so if you have had your eye on something, in any of my website pages, and even in my ETSY store, just drop me an email or a comment, and make me an offer! (No need to be registered at ETSY ~ well work it out).

Posted by Rachael Kinnison at 11:18 AM 3 comments: 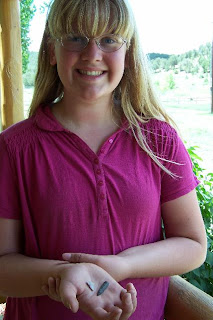 Our property here in southern Colorado lies directly on the olde Santa Fe Trail, in fact, the gallery lies on the exact spot the Olde Madrid Commissary stood in the 1860s. I have very much enjoyed, over the years, looking around the yard for little treasures~ I have found Indian head pennies, clay marbles, and heads and bits from early china and bisque dollys. One of my favorite pastimes tho, each spring, is to go up to the top of the property and look for arrowheads, as it was a known Indian settlement.

While I was feeding Luke his bottle on Saturday, Tressa came over and says 'Hey Mom~ is THAT what I think it is???' as she bent over and picked up a little pink quartz arrowhead......I said~ yep, sure is! To that she squealed with delight and insisted that we go a hunting on Sunday.... and WHAT a hunt it was! 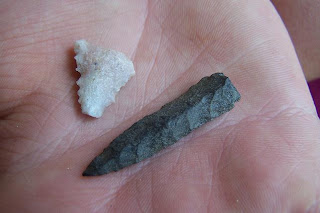 We walked around a little, I remembered the shovel, in case we came across any rattlers, but forgot my glasses, so I couldn't see a thing. I found a nice chunk of moss agate, that was most likely a piece of one, as that would have been a stone the Indians traded for....most of the natural rock around here is sandstone. Anyways, she had ambled off, so I called for her and once she was within yelling distance, I told her to come down a little draw, and you guessed it, I herd the same..."Could this be?????" and what sounded like a stampede coming at me, and just look at the wonderful spear point she found! We have a whole little jar of arrowheads we have found here, but this is the first spear point, so we both were elated! 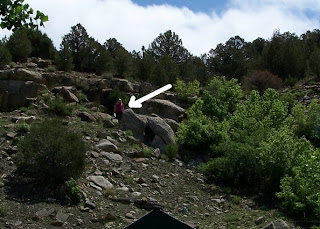 As we walked home, my son Josh appeared at the top of the hill behind the house, and this is where it got really interesting. As you can see, we have very rocky terrain here, perfect for rattlesnakes, so I do not let the children just mosey about up on the hill...but it was morning, and he was sitting up on the big rock there, where the arrow is, enjoying the view~ so I told him he could sit a while, then come back home. You can see the top of the garden shed at the bottom of the picture~ its just right behind the house.......well, by the time my olde decrepit self got back and sat down in my chair, both he and Tressa came zooming in the house like aliens had finally landed.....screaming and yelling so back up the hill I raced with them...cause Josh looked down where he was sitting, and low & behold!!!! 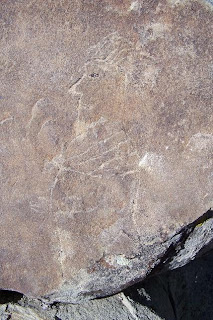 Look at what was carved into the rock! Can you believe it? We have walked by this rock the entire 10 years we have lived here! There is even a solar light my husband put in the little cave to light the whole big thing up at night....and we never saw the man standing there. 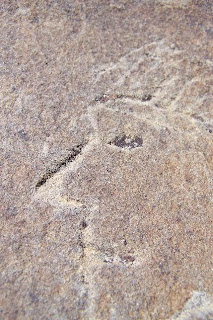 The carving is olde, there are lichens growing within the lines...He has spiky hair (feathers perhaps), what looks to be a shawl ties around his shoulders, and you can see one arm there. Just absolutely fascinating! There were Kiowa, Arapaho, Comanche & Cheyenne Indians in our area, so I will be taking this picture to the archeology museum in town, to see what they think when I get caught up. 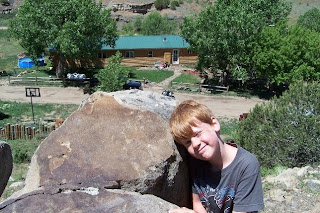 See how close this is to the house? Its amazing what you can see, if you just slow down and take a peek!
Posted by Rachael Kinnison at 3:05 PM 6 comments:

My Mercantile pages have been updated~ 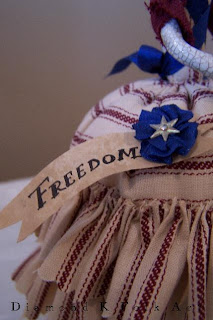 For this June 14th! I hope you will stop by and take a peek if you have a moment! I have been swamped as of late, and have not had time to make up my newsletter that I usually send out today, so you will just have to watch the blog to see what I been up to, and what awesome things are coming! I am starting to catch myself up, and will most definitely get 'The Posey' out on time for the July 14th update. Thankyou so very much for stopping by!

Posted by Rachael Kinnison at 9:10 PM No comments: 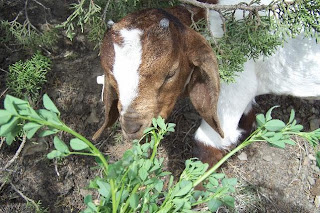 Ohh yes, its true, I have absolutely fallen head over heals in l*o*v*e* with my new little buck, Luke...........or perhaps our 100+ degree weather has baked my brain...I suppose that could be! Luke was actually born the day after I got my black doe, Meisie. His mamma had a set of twins that morning, and then that afternoon, looking into her pen, there was lil Luke in the corner, with his mummified twin a little ways away~ so mamma actually had quads! She had her two tho, and cause he came so late, she didn't want him, so Luke has been on the bottle ever since.....and you can really tell~ he thinks he is a human! 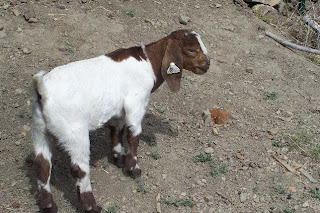 He is a Genemaster Kiko/Boer F3 buck, and will be the new Pappa around here when he grows up. He follows me everywhere, even in the house, and up on the couch~ he doesn't mind. He bleets and screams when I leave him in the pen~ it is heartbreaking! He is so easy to spoil rotten~ he loves to sit in my lap and snuggle and fall asleep....and when I say snuggle, he really does! Hes so precious and I just love him to bits! 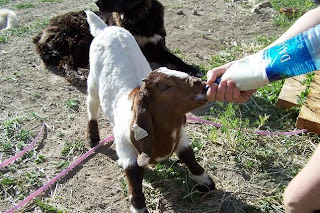 So if you ever wonder what I do at 7 am , noon and 7 pm.....I'm feeding the family....and 8 am, 1 pm and 6 pm I'm out feeding Luke! Seems all I do lately is be making supper for something or another....all anything does around here is eat eat eat!!!! shoosh
But in between the feedings.....I am working on my dollys and already have some really spectacular Halloweenies for you this fall~ 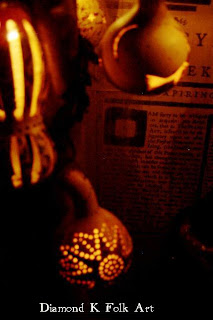 I have been working on a particular design all spring and summer, that is literally, the best, most AWESOME spectacular piece I have ever made....I should have it done in about a month I am hoping~ I cant wait for you all to see it! The above sneeky peek is from a new Showcase piece, so yes, it is illuminated with electricity....its just fabulous I have to admit!

My studio is getting crowded with everything I have going on, and I have decided to run another round of eBay specials this coming week~ I will be listing both dollys, and c1860 antique children's clothing on eBay this evening~ so DO stop by and take a peek. I am nearly finished culling out my later years clothing for the Museum, have saved some really rare Civil War era boys things for last...I hate to part with them, yet, it is needed to focus my space and attention on the earlier years. I wish I had federal funding and could have a huge 5,000 sq ft gallery and be open 24 hours a day, but alas, I am just lil ol me, with limited space that I have to make count! I hope you all are having a wonderful summer, full of love, and joy and family & friends!! I am so blessed, my cup runneth over, and I hope yours is too!

Posted by Rachael Kinnison at 9:44 AM 2 comments: