Have a Happy & SAFE Hallowe'en! 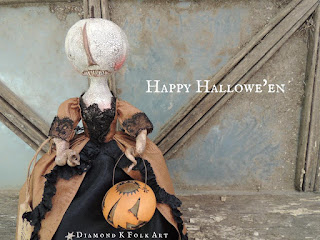 Cotilde wishes each and every one of you  a  Safe  Hallowe'en.  Get your flashlights ready, tell some spooky stories and listen to the wind howl!
Posted by Rachael Kinnison at 12:02 PM 1 comment: 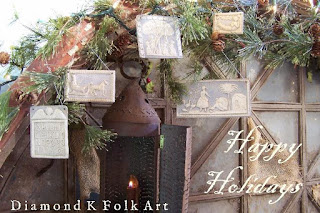 It's that time of year again, Halloween is just around the corner and then on comes the Merrie Holidays!  I love the fall, its my favorite time of the year~ and one of the reasons is that this is when I start making Christmas ornaments. Each year I design a special ornament or two, and offer them only that season. Along with those special sculpted ones, another favorite of mine, that is very popular with you all too, are the ones I make from Springerle molds.  I do have a few precious antique molds, and many reproductions of the early hand carved cookie molds, that not only do I use for making cookies, but also pressing Christmas Ornaments from.  I have added some old favorites to the ETSY store this week, and will be offering some new ones on the next TDIPT update in November~ I think that will be my official Christmas Ornament update!   Each ornament is hand pressed in mache, then carefully colored with watercolours to resemble Wedgewood & Jasperware~ of coarse, if you see something in the ETSY store you would like in a different color, I also make up special order sets~ pastel pink is a very popular color, especially for the angels.

If you didnt know,  the earliest printed recipe for Springerle dough dates to 1688. It is a traditional European cookie with anise flavoring that was rolled and formed by pressing into carved wooden molds. The cookies are dense and hold their shape beautifully, and the more elaborate the design, the more prized the cookies were~ they were popular Christmas gifts among the Nobility in the early times.  The cookie molds have been passed from generation to generation, and many still survive today, and many of those have had molds made from them, so all of us can enjoy these wonderful edible works of art!  My ornaments are not edible tho~ they are finished with a series of glazes that give them a nice aged patina.

(Springerle is pronounced Schpring~ girl~lee )
Posted by Rachael Kinnison at 3:42 PM No comments: 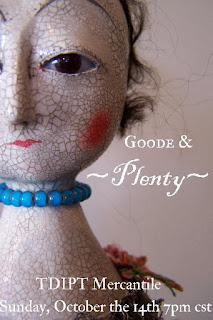 I hope you can join me for a little update Sunday evening, 7 pm central mountain time on my page at the  TDIPT Mercantile. Plenty will be there, along with a pretty little trifle for your Holiday decorating!
Posted by Rachael Kinnison at 4:23 PM No comments:

I often wonder how history would be changed, if photography would have been invented earlier.  It would make understanding things so much easier~ there would definitely be no question of how a 17th c forehead cloth was worn, if we had a picture of someone actually wearing one.  Just think how many things you use each and every day, that you use until it breaks and then throw it away.....not thinking twice someone someday may really want to know what it was or how it was used.  This is why I love studying early photographs~ daguerreotypes from the early 1840s & 1850s  hold a wealth of information in them~ most of the time, whats large and in focus is not what I am interested in...its the small details~ perhaps what is in a pocket, poking out from under a skirt hem, or sitting on a table that I am absolutely freaking out over! 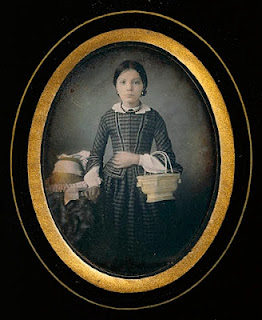 Take this image from Getty Archives as an example~ tho quite large and wonderfully in focus, she is holding a gorgeous basket purse~ obviously. If you look closer however, you will notice something not so ordinary about her plain, unpainted purse~ it has tassels. I have studied this photo for years, literally. I have wondered all sorts of things~ like what made her think to put tassels on it in the first place? What were they made of????  Why haven't I seen more like it? 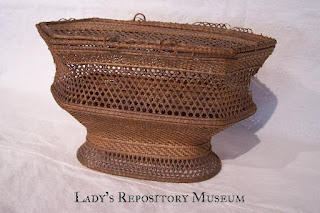 Then I was asked if I would be interested in buying an old 'cricket' basket. Just a tattered old thing, falling apart~ do you want it?  Well YES!  I was excited because rarely do I come across a shape of these early woven purses that I don't have yet. Isn't it gorgeous? Its so very fragile~ think of the skeleton leaves one finds in the fall~ they have decomposed to their veins, and are so beautiful, when you try to pick them up they just fall to dust. That's pretty much this basket in a nutshell. The fragile open weave has broken in a few areas, its so terrifically lightweight, my hands tremble terribly to have to pick it up and move it for fear of holding it to tightly and breaking it further. 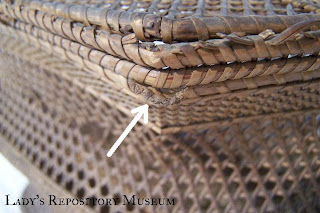 My real surprise came when I got it home and was photographing it for my record file. When I turned it to the back, g*a*s*p.............I nearly fell over! Not one or two, but three remaining tassel loops are still connected to the points of the basket!!!!!  The third one, above, you can see the arrow pointing to it, illustrates my hypothesis that these were always fragile baskets~ the loops having been broken off in the period, and replaced with a loop of knotted linen thread. 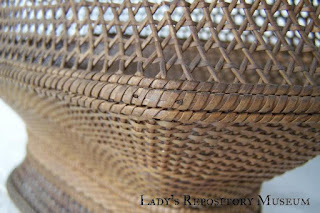 Once I saw the complete loops, I quickly looked at the points for evidence of the others, and yes, every point on this basket purse once had a splint loop for attaching a tassel to~12 in total, 6 on each end! 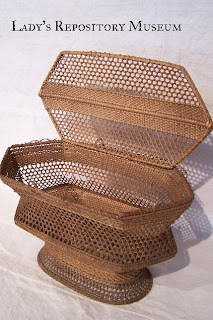 One can get lost daydreaming about all the wonderful treasures this once held.  The hinged lid is still attached and in near perfect order, tho the 2 original swing handles are long since gone.  This basket resembles closely this next basket~ 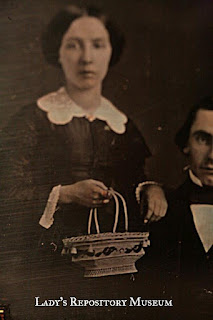 Matter of fact, they were most likely made by the same hand.  Her basket has just 6 tassels, but at the exact same points as mine~ my basket had an additional bottom row of tassels to make up the 12.  Her basket has 2 handles, as did mine...... 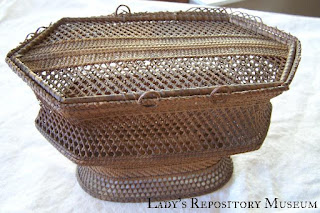 What else can you see the same or similar? Look at her center row of decoration~ what looks like paint is actually wool embroidery~ the horizontal ribbing and foot are near identical to my basket.  Folks could purchase 'plain' baskets like this, then take them home and embroider their own design in the open weave section, and add their own coordinating silk tassels.  The embroidered section of her basket would have been woven in an even weave~ think of plastic canvas today~ easy for counted thread work.  Lastly, much of my baskets fancy woven rim is missing, but some parts are still there, and is absolutely identical to her baskets rim! 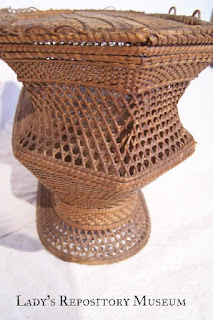 I like this picture of the end, kind of reminds me of a bow of a ship~ there is so much going on, so many angles, no doubt woven by a master. 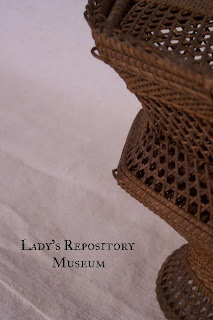 Here you can see a view of the two original splint tassel rings~ HEAVENLY!  Of coarse I would love to find a basket with the original tassels still remaining~ but until then, I am absolutely happy with this olde relic~ and the fact that I found a third image of another basket with tassels! 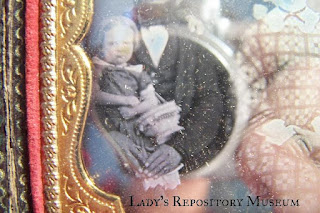 What I find interesting about this one is not the shape difference, but that the basket is a small child's.  I wonder how long it lasted before it got sat on????????
Posted by Rachael Kinnison at 3:48 PM 2 comments: